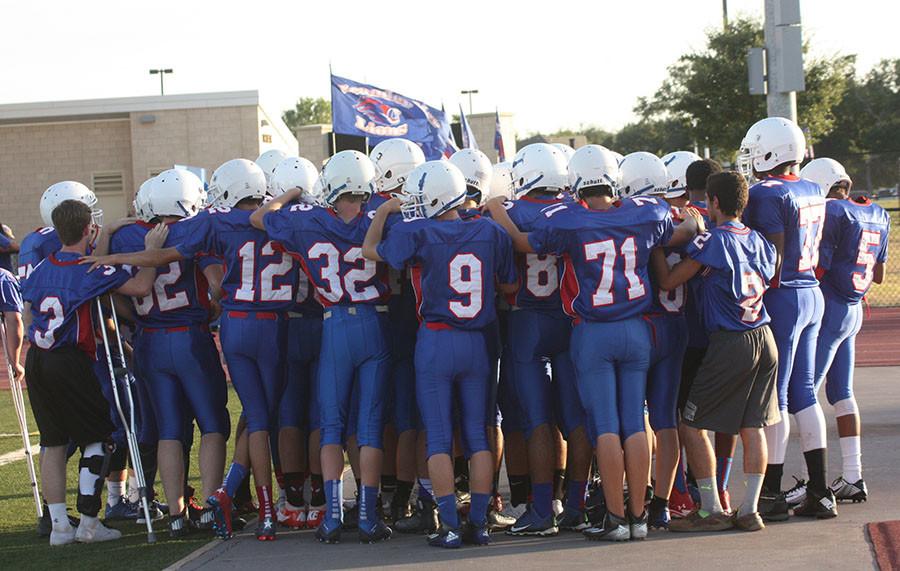 The Blue team huddles up at home before their game at 7:30. They do this as a ritual before every game

The Freshmen football teams played against the Pflugerville Panthers in their first home game in Bible Stadium on September 3rd. Though improvements were made from their previous game, the Lions lost with the red team ending with 21-0 and the blue team with a final score of 36-6.

“I thought they played very hard,” freshman football coach Adam McLain said. “They’re improving a lot on their work ethic and toughness and it’s something we’re going to continue to work on throughout the year.”

The blue team’s defense had competed well throughout the game with defensive-end Grant Burroughs and nose-guard Hunter Andrews helping to keep the game steady while offense had the ball moving well during the first half with a couple of possessions but, a lack of execution that led to no points, but, as the games go on, repeats and mistakes are bound to happen. Similar to their previous game, only one touchdown was made for the blue team by tight-end receiver Tristan Ortiz while on offense during the second half.

“When I caught the ball, everyone just started telling me to run. So I did,” Ortiz said. “And all I see is them grabbing my legs and I almost went down, but I got there just in time.”

While the blue team had one success in their game, the red team had drawn the short stick against the Panthers. With players in new positions, defense had improved against their run game, but had missed a few tackles and assignments that ultimately led to their defeat. Though the red team’s offense improved their run-game as well, coaches are looking forward to better executions in passing games.

“The kids are playing hard,” McLain said. “We’re introducing new tackling drills, new things to help build on that toughness and help get these guys to remove the fear from their heads and just to run along and play football.”

The Freshmen teams will play again at home in Bible Stadium on Thursday September 10th against the Rouse Raiders. The Red team will play at 5:30pm and the Blue team at 7:30pm.