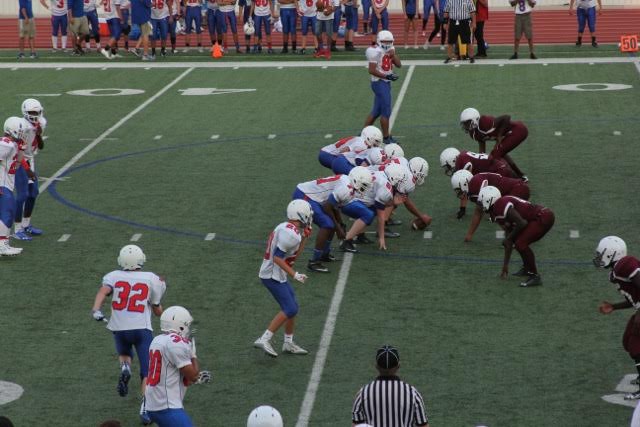 Freshman blue team lines up against Killeen Kangaroos on August 27th in Leo Buckley Stadium. The blue team would later lose the game to Killeen.

The Freshman football teams traveled to Killeen on August 27th for their first game against the Kangaroos in Leo Buckley stadium. While both teams put up a strong fight, they were defeated with the Red team ending with a score of 28-0 and the Blue team finishing with a score of 42-7.

“We had a lot of self-inflicted wounds,” freshman coach Kyle Sturgell said. “Maybe we weren’t just rounded up properly in a certain play or the right positions for the guys to make a tackle. Things like that led to their scores.”

Playing as 6A teams, both teams had their share of hiccups and almosts. The Red team played hard throughout the game with defensive lead Brendon Spyers playing on safety, defensive linebacker Cavan Spence on tackles and quarterback Diego Segura commanding the offense to lead the Red team with a positive attitude.

“I was confident that we were going to go out on the field and we were going to perform the best of our ability.” Red team Quarterback Diego Segura said. “It came a little short and we have stuff to fix, but we’re gonna fix it.”

The only touchdown of the game was scored by Blue team player Jake Reed during the third quarter of the , with help from Blue team Quarterback Rashad Carter. During half time, the freshman coaches had encouraged the team to fight back in the last half of the game and to push through with everything they had.

“It felt amazing,” freshman Jake Reed said. “We had run this play several times and I’m actually not supposed to get the ball, but I talked to Rashad and I was open every single time we were in that play and we took it to coach sturgell and said: ‘ We need to run this play right now. We can score on it.’”

Even though their energy fell short late in the fourth quarter and both teams had lost, they are striving to work, practice and perform better on the field in future games.

“I was proud of their effort and how they came together as a team second half,” Sturgell said. “We’re looking forward to applying what we learned in practice and taking that out to the field.”

The Red team will play again at 5:30pm and the Blue team at 7pm on September 3rd against Pflugerville at home in The Bible Stadium.