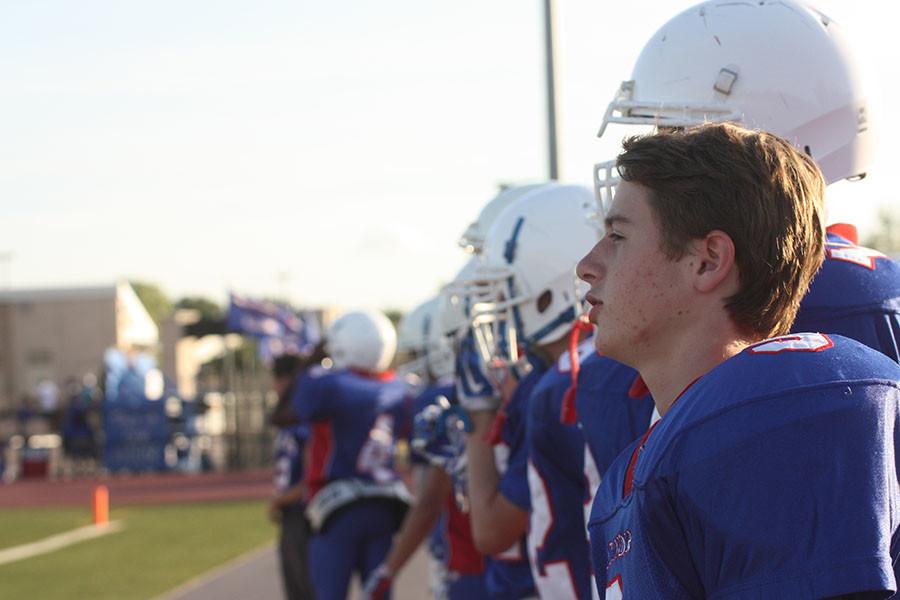 The Lions prepare for their game and take a look onto the field beforehand. The Marble Falls game was the first and possibly last time the freshmen will play together in a game as a whole.

“We ran the ball probably better than any game this year,” Coach Kyle Sturgell said. “It’s a good step in the right direction and it’s encouraging, especially going into these next four games that we’re starting to execute a lot better with our blocking and running the run plays correctly and it showed last night. It was a pretty solid effort.”

In response to the Timberwolves scoring first in the Red game, quarterback Diego Segura threw a touchdown pass to wide-receiver Darius Williams tying the score at 7-7 in the first quarter. In the second half, Segura handed the ball off to running-back Adison LaRue who finalized their touchdowns at two for the night. The game later ended with a score of 32-12, Timberwolves taking the game.

“I feel like we were more excited to play,” Segura said. “This was crosstown rivalry, this was Cedar Park. We had something to prove and we wanted to prove it. It was a big touchdown and it showed us what we could do and how we could succeed.”

Blue team quarterback Rashad Carter scored twice, then later executed a play-action pass to wide receiver Colby Cavanaugh who drove the ball 30 yards to the end zone in the third quarter, ending the Lions night with a score of 56-21, Timberwolves coming out victorious.

“It’s pretty crazy,” receiver Riley Wells said. “It’s a big deal to us because we’ve been working hard in practice every week, trying to get that first W (win) so I think the wall has broken in and we’re going to start winning some games.”

Going against Marble Falls in a joint game where both teams collaborated as one, and with five quarters instead of four, the Lions pounded the Mustangs with a score of 15-26, coming out victorious for the first time.

“We won our first game and that’s a big deal,” Segura said. “I think a lot of people expected it to be a clear cut division and when everyone came together, it wasn’t. It was just everybody together. It was an energy that none of us had seem to have felt before.”

“We had more players that stepped up into positions and as a team, we got to bond together and it was a great way to get a win,” Carter said. “We’ve been waiting for this since the season started and in the locker room it was crazy. We were in there singing, banging on the walls, screaming yes and just chanting the school song and it felt really good.”

No touchdowns were made in the third quarter. At 8:20 into the fourth quarter, Carter passed off a touchdown pass to Wells which was followed by a two point conversion that made the score 15-14, with the Lions in the lead.

“On the sideline, Red team and Blue team, the chemistry works really well because we all know that we’re just one team,” Wells said. “Normally it’s just practice. Just scrimmaging against them sometimes and we have different personalities from each group that make it exciting and loud on the sideline and that gets us pumped up and ready to play.”

At the beginning of the fifth quarter Carter broke through at 7:05 and brought the scoreboard in Lions favor, making the score 15-20 with the Lions stealing the lead. LaRue then finalized the game at the six second mark leaving the Lions with their first victory of the season at a score of 15-26.

“It’s still a progression,” Segura said. “It’s always going to be a progression, but there’s a certain mesh that happens. There’s a connection that everybody has [when] it’s not Blue and Red, it’s Leander Lions.”

The Lions play again as Red and Blue teams on October 22nd against East View in the East View High School Stadium. The Red team’s game will begin at 5:30 p.m. and the Blue teams at 7 p.m.