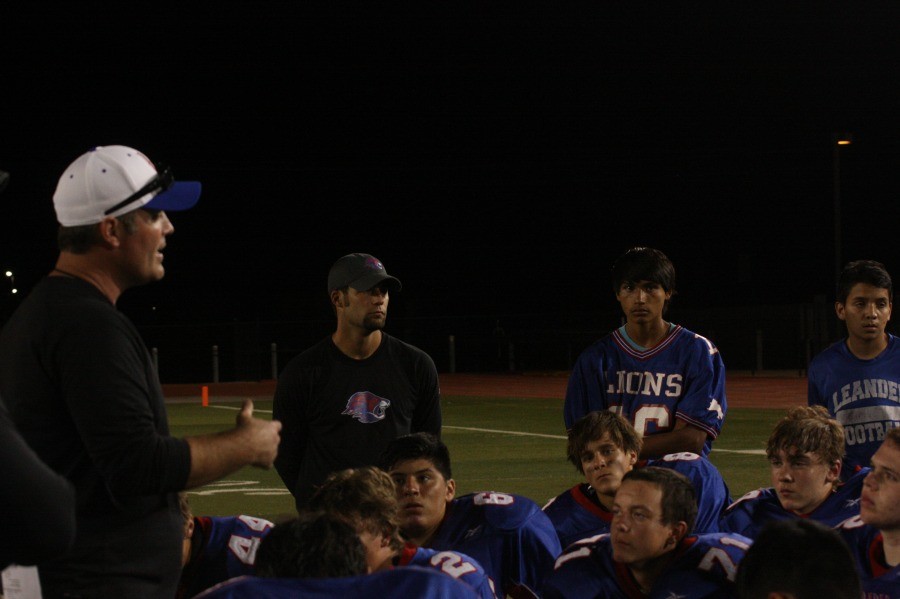 The freshmen coaches speak to the players about what they could improve upon in upcoming games. With a district score of 0-5, the freshmen lions plan to take the bye week as an opportunity for improvement in smaller details.

The freshmen teams traveled to Ed W. Monroe Memorial Stadium on September 24th to play against the Vandegrift Vipers. Both teams lost with equal scores of 0-40.

“We were able to move the chains on some drives and give ourselves some scoring opportunities,” Coach Kyle Sturgell said. “We also connected on a couple of big plays. Overall execution improved but we still have a ways to go.”

In the Red team’s first quarter, defensive back Brendon Spires took the quarterback position and made a 35 yard pass play to running back and wide receiver Darius Williams that came close to scoring.  Defensively, linebacker Jeffrey Dixons’ and defensive end Ben Hoffs’ tackling forced Vandegrift to punt multiple times throughout the game in attempt to get the ball in the Lions’ favor. The game ended with a score of 0-40, Vipers over Lions.

“[My favorite moment was] catching that pass that Spires threw to me,” Williams said. “I was afraid I was going to drop it because I couldn’t find it at first and then when I saw it, I caught it.”

Similar to the Red team’s game, the Blue team’s smaller accomplishments improve each week according to the coaches in order to improve overall performance. The Blue team’s defense was able to move the ball at a steady pace for the whole of the competitive game as described by the players. Cornerback Ismael Sanchez had a couple of pass-breakups and one interception in the 2nd quarter while free safety Ethan Rosenberg completed tackles while attempting to defend against the Vipers but the game ultimately ended with a score of 0-40, Vipers taking the win.

After the bye week, the freshmen Lions will face off against the Cedar Park Timberwolves on October 8th in John Gupton Stadium. The Red team’s game will begin at 5:30 p.m. and the Blue team’s at 7:00 p.m.