Another close win for JV

Lions beat Westwood for second one-point game of the season 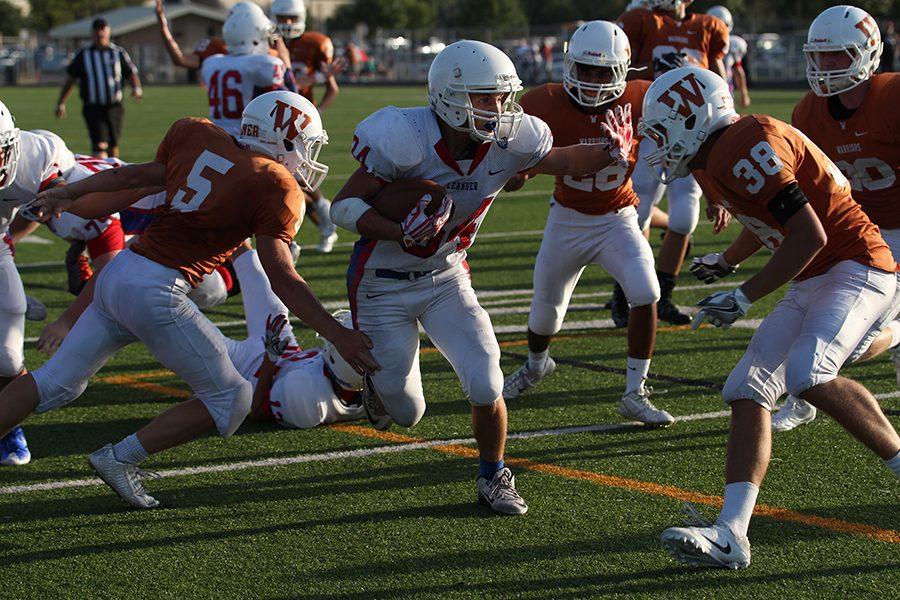 Addison Larue stiff-arms a Warrior defender. He scored three touchdowns on the night.

The JV Lions were at the Westwood Warrior Bowl Thursday night for their first away game of the season. Led by sophomore running back Addison Larue and new quarterback sophomore Spencer Cook, the Lions prevailed over the Warriors 20-19.

“It felt good to take over as starter,” Cook said. “I was glad to get the spot and I’m ready for the season.”

Relying heavily on their respective running backs, both teams attempted to push through the opposing defense. The first quarter proved uneventful for both sides as neither offense was able to progress the ball near the other’s end zone, and every drive ended in either a turnover or a fourth-down punt.

“Both sides played hard and it showed,” sophomore linebacker Kavan Spence said. “It wasn’t easy for anyone to move forward in the first.”

Things remained the same in the second quarter as both sides maintained an ineffective running game. The Warriors, in an effort to push for a touchdown, brought out a new quarterback who, after a failed set of running plays, switched to the passing game. After only two passes, he was sacked and fumbled by sophomore linebacker Diego Costa-Owens and junior linebacker Dyson Jones, who recovered the ball.

“It felt great [to recover the ball],” Jones said. “We win games when we give our offense extra possessions.”

With the ball back in Lion possession, Cook handed the ball off to sophomore running back Addison Larue, who in two plays, rushed for over 60 yards before finding the end zone. The point-after kick by junior Reynaldo Montes was no good, and so the Lions took a 6-0 lead. Immediately afterward, the Warriors threw for a long touchdown pass, which itself was met with a rushing touchdown from Larue less than a minute later. The half closed with the Lions leading 13-7.

“We did great and it felt good to be leading,” sophomore defensive lineman Henry Birmingham said. “It’s always good to take an early lead.”

After a malfunction with the scoreboard, the game got back underway with Lion possession and a quick touchdown by Larue, however it was ultimately called back. After failing to regain the touchdown, the ball was punted back to the Warriors, who scored on the drive, making the score 13-13. Both teams handed possession over several times, but neither was able to score before the end of the third. The Warriors were quick to score again, bringing the score to 19-13, but with only 2:28 remaining, Laure broke through four defenders to score his third touchdown. After a good point-after, the score sat at 20-19, with the Lions in front. The Warriors failed to score again in the closing minutes.

“It was a close game and we can do better,” junior wide receiver Morgan Rosseisen said. “We just have to play harder and we can score even higher.”

The JV Lions are now 2-1 overall and have one game left before moving into district play. They will face the Stony Point Tigers on Thursday away at Stony Point Field, starting at 5:30.