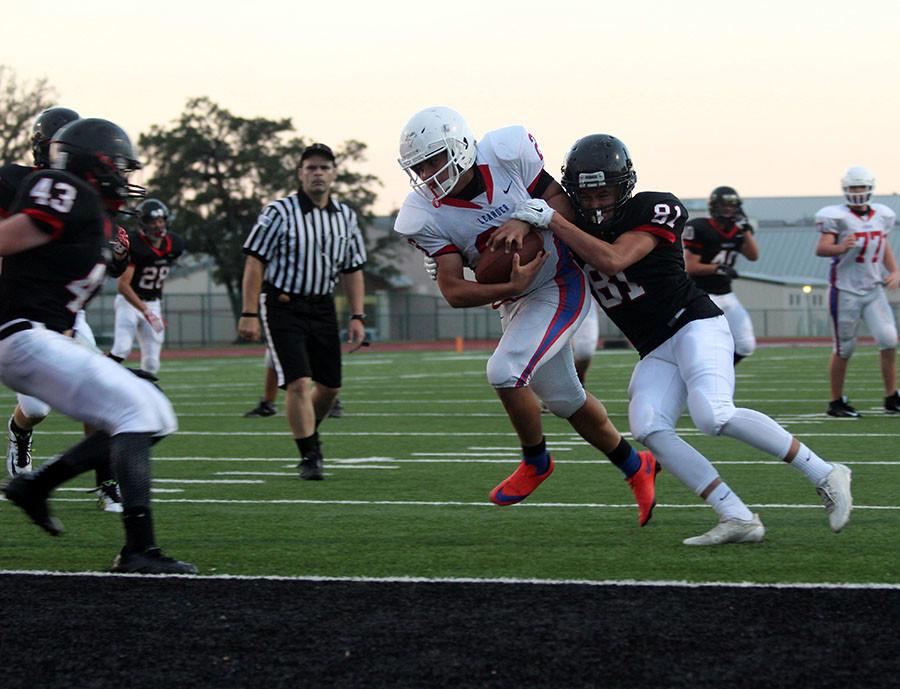 Sophomore Rey Montez scores for the Red team. This is Montez’s second touchdown in a row.

“Even though we lost we had great strides this week,” junior Mark Grissom said. “We gave it our all and left it all on the field.”

The Red team lost  14-6. The Rangers scored early in the first quarter and with seconds left in the first half. The team tried to decrease the difference between the two teams after the coaches fired up the team at halftime. Sophomore Rey Montez scored from a pass from sophomore quarterback Josh Rude late in the game.

“I thought we did well even though we lost,” sophomore Alex Young said. “We did well on offense, making good drives down the field.”

Montez, Rude and Young all helped try and keep the offense going. On defense, junior Kash Richards had an interception and helped stop the Vista Ridge on some of their drives.

“We’re looking forward to next week for our last game,” sophomore Tyler Dillard said. “We need to make sure we work hard in practice to go out on a win.”

“The Blue team played well, we had a few mistakes early on in the game,” Coach Arteaga said. “ Vista was a very talented team and our team fought hard, but we couldn’t get those points back we lost earlier.”

The JV teams will play at home at Bible Stadium next week for their last game of the season against Dripping Springs at 5:30.