The Blue and red teams combine to defeat Marble Falls 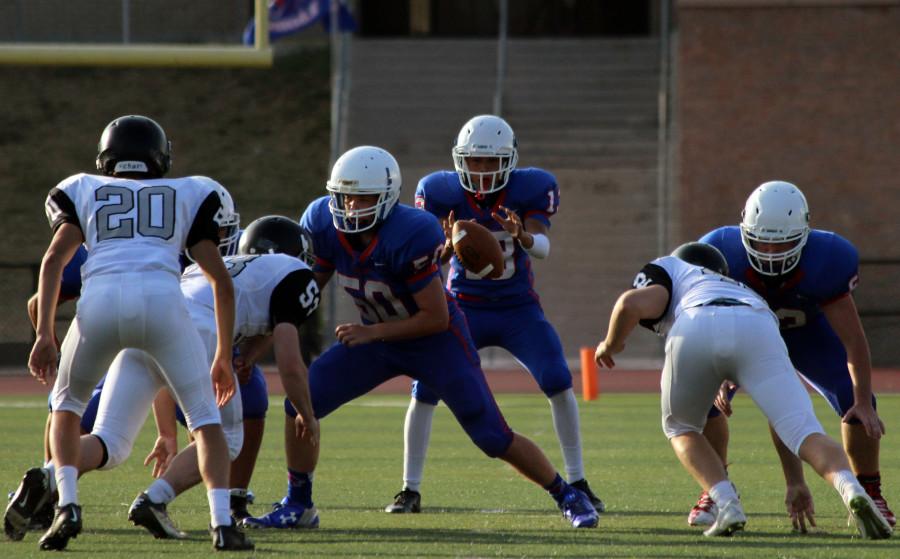 Sophomore Red quarterback Josh Rude getting the ball snapped to him. Rude played quarterback for the first time this year as he usually plays tight end.

The Lions JV only played one game because Marble Falls only has one JV team, so the Red and Blue team combined into one team. They won with a score of 38-15.

“I felt like both teams played really strong,” sophomore Jake Egelsee said. “It was a great way to bounce back after both teams took a hard loss against Cedar Park.”

The JV Blue team was disappointed last week with a loss that ended their undefeated streak and they hoped to bounce back this week. The Red team also lost to Cedar Park.

“[We] just [wanted to] make sure everyone was doing their job and was focused,” sophomore Jake Alexander said. “So we could seal this win so we wouldn’t have a losing streak.”

The teams pulled out a win scoring five touchdowns in the process. Junior Christian Matthews scored a touchdown for the third game in a row from a pass by junior quarterback Kyle Irlbeck. Irlbeck also rushed for two touchdowns for the night. Sophomore running back Jake Alexander rushed for his first two touchdowns of the year. On defense sophomore safety Anthony Moctezuma helped the backfield keep Marble Falls out of the endzone some of the night. Junior linebacker James Leftner and the defense also helped keep Marble Falls offense to 18 points.

“It was upsetting losing to such a big rival like Cedar Park but we carried our frustrations over to the next opponent which happened to be Marble Falls,” sophomore Josh Rude said.

Both JV teams will be back next week against East View at Bible stadium with the Red team kicking off at 5:30 and the Blue team at 7:30.