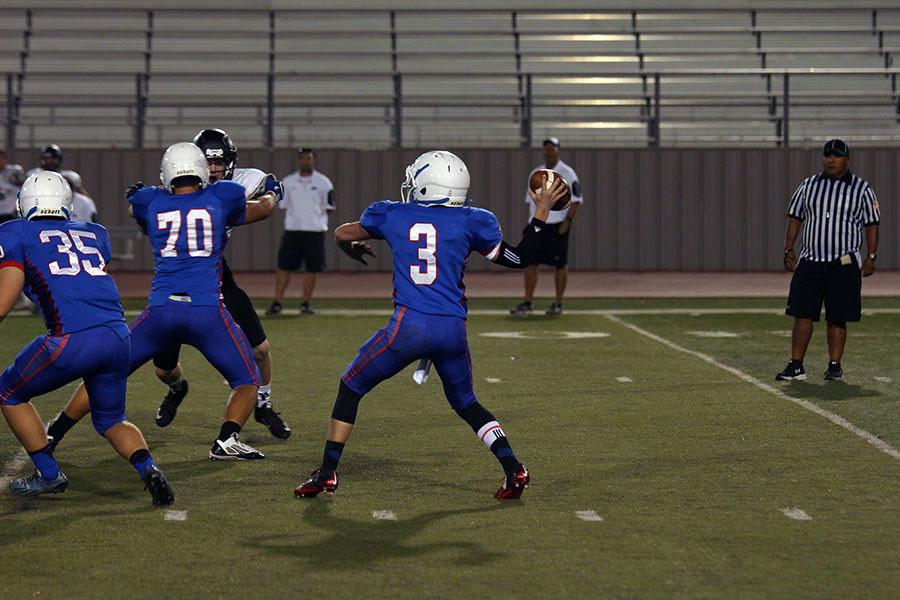 Quarterback Kyle Irlbeck sets up to throw a pass. He connected with his receiver for a touchdown later in the game.

The Red and Blue teams both fell short to the Cedar Park Timberwolves last Thursday night at Bible Stadium. The Red team lost with by a score of 30-0 while the Blue team lost 22-14.

“The Blue team played very well,” Head Coach Tim Smith said. “They never gave up and they gave 100% every down that’s what makes them a great team.”

The Red team played first and despite important plays by sophomore Lukas Boeck and junior Cameron Fikac, they lost by a score of 30-0. The Timberwolf defense kept the Lions to a shutout despite the return of their quarterback sophomore Coltin Davis. On defense, the coach said that his Lions worked all four quarters to stop the Cedar Park offense, but came up short.

“I felt that the Red team showed glimpses of what they are capable of,” Coach Arteaga said. “We just didn’t do enough to play and win four quarters of football.”

“It was disappointing to not get the result we wanted,” sophomore Riley Harkleroad said. “But we’ll move on and we know we’ll come back next week even harder against Marble Falls.”

The JV teams will combine into one team to play next week away against Marble Falls starting at 5:30 p.m.