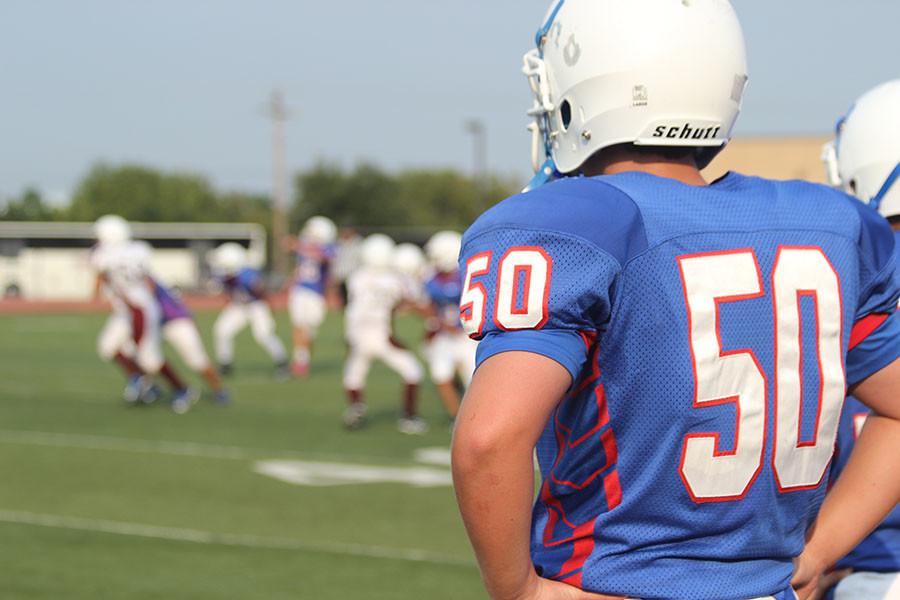 Sophomore Jacob Ellis watches on as his team faces Killeen. The red team went on to win 36-14.

Both JV teams faced and defeated the Killeen Kangaroos last Thursday night at Bible Stadium. The red team won with a score of 36-14 and the blue team defeated Killeen 36-18.

“We really clicked as a team,” sophomore Jake Egelsee said. “It was such a great feeling opening up the season with a big win like that.”

The red team played first and was led on offense by sophomore quarterback Colt Davis who came up with many big plays including 2 touchdowns. On defense junior linebacker Jordan Spivey helped keep the defense together and only conceded 18 points.

The blue team then went on to win 36-18. On offense junior quarterback Kyle Irlbeck helped move the ball down the field and Mark Grissom had two runs down the field one resulting in a 40 yard gain.

“We played really good,” sophomore Jake Egelsee said. “Our defense was getting stops and kept putting us in a position to score.”

The defense was led by sophomore defensive end Jeremy Kracy who helped lead the defensive line and made several key stops throughout the game.

“I think as a team we did a great job, the offense definitely pulled their end and the defense did well,” sophomore David Wolfe said. “The coaches made the proper adjustments during the game to keep Killeen out of the endzone.”

Both JV teams will play away against Pflugerville this Thursday with the red team starting at 5:30 and the blue team at 7:00.