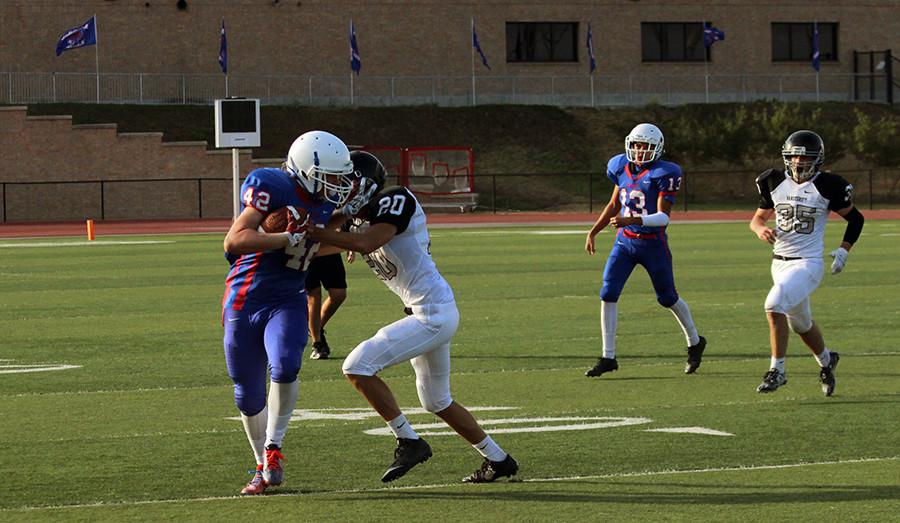 Sophomore Ivan Ayub catching a pass from sophomore Josh Rude. The Red team is 4-4 this season so far with two games left.

The Lion JV teams both defeated East View at Bible Stadium last week. The Red team won 28-6 and the Blue team won with a score of 25-7.

“We had worked all week during practice to try and keep our winning streak going,” sophomore Dyson Jones said. “We played with unity and we all carried out what we needed to do.”

The Red team came into the game with a win last week against Marble Falls and continued their winning streak by defeating East View 28-6. On offense, sophomores running back Lukas Boeck, quarterback Josh Rude and running back Rey Montez scored to get 28 points for the Red team. On defense sophomore linebackers Kash Richards, Dyson Jones and Jordan Spivey helped lead the team by making tackles for some of the night.

“We all went out and did our job,”  junior Mark Grissom said. “We showed them what we as a team can really do.”

The Blue team has only lost once this year and made sure to keep it that way with a 25-7 win against East View. On offense juniors quarterback Kyle Irlbeck and receiver Christian Matthews continued their scoring streaks with Irlbeck scoring one touchdown and Matthews scoring two touchdowns for the night. Sophomore tight end Josh Davis also scored a touchdown.

“The Blue team is still playing strong thanks to the offense, defense, and their will to never give up,” Coach Grissom said.

Both JV teams will be playing away against Vista Ridge on Thursday at 5:30 p.m.