Swept by the Vipers 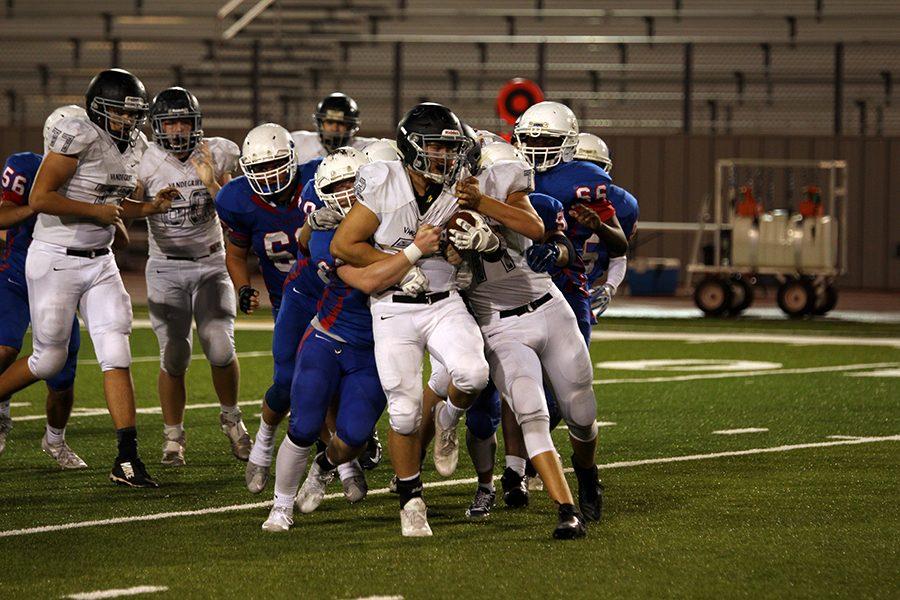 The Viper running back is stopped on a run by the Lion offense. The play, which was a failed 4th-down conversion, resulted in a turnover.

After spending the season united as one, the JV Lions played their first games divided as two last night. Despite finally getting back home field advantage, both teams fell to the Vandegrift Vipers, with JV Red losing 0-34 and JV Blue losing 12-40.

“It wasn’t what we hoped for, but we played hard,” sophomore defensive back Ben Hoff said. “We’re not one team anymore, so we just have to play better.”

The Red team took the field first and was met by harsh opposition from the get go. The Viper defense prevented the Lions from picking up first downs and held them from ever reaching the endzone. The Viper offense was so effective in their aerial attack that the game ended in a shutout at 0-34.

“The Red team played well, but they just got ahead of us,” red team Head Coach Arteaga said. “Vandegrift is a talented team, and our team did well to get points on the board, but we just couldn’t get there.”

The blue team’s roster retained the season’s leading scorers. In three quarters, the Vipers had taken a 5-touchdown lead and were leading the Lions 34-0.

“It’s never great to be down by that much,” blue team Head Coach Grayless said. “Sometimes you just have to put it behind you and do what you can to come back.”

Late in the third quarter, the blue team got on the scoreboard with a rushing touchdown by junior running back and kicker Reynaldo Montes. Sophomore running back Adison Larue made large gains for the team, but it was junior Hunter Newman who went on to score the final Lion touchdown.

“I’m proud of our team,” Grayless said. “I told them to get out there and make plays and they delivered. We didn’t win, but we managed to get in two touchdowns and now we just have to look to next week to do better.”

The Lions will face the Hays Rebels on Thursday at Bob Shelton Stadium in Buda. The Red team will begin play at 5:30 and the Blue team will play at 7:30.