Taking on the Vipers

JV football gets a win and a loss at Bible Stadium 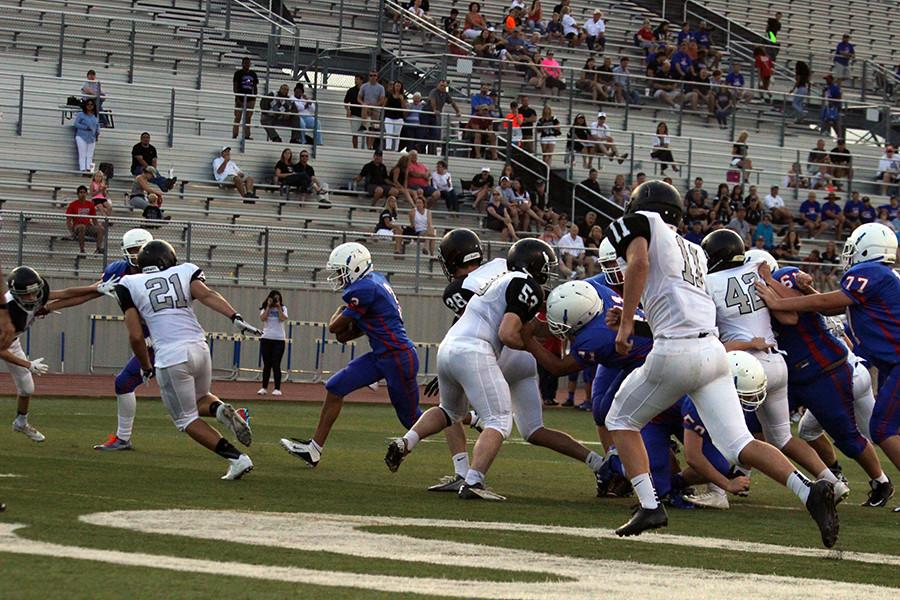 Running back sophomore Lukas Boeck runs in for a touchdown. The touchdown put the Lions ahead for the first time of the night.

The Red team fell to the Vandegrift Vipers last Thursday with a score of 21-12, and the Blue team beat the Vipers 13-6.

The Red team came up short for the third game in a row to a mostly fast-paced Vandegrift team. On offense Lukas Boeck led the team in rushing yards and scored a touchdown in the 4th quarter to put the Lions in front. Vandegrift came back late in the end of the 4th quarter to score two touchdowns. The defense held Vandegrift to a score of 21 points. The defense also put six points up on the Lions’ scoreboard after returning an interception for a touchdown.

“It was a good game,” sophomore Dyson Jones said. “Even though we lost, we played hard and had a lot of fun despite the loss.”

The Blue team kept up their winning habits and defeated Vandegrift with a score of 13-6. On offense, junior Kyle Irlbeck and Christian Matthews scored a touchdown a piece. The defense helped keep the Vipers from only scoring one touchdown for the night. Sophomore Riley Harkleroad made key plays all night to hold Vandegrift to six points.

“Overall I feel like our team is getting better each week which is what good football teams do,” Coach Arteaga said. “We still have some work to do and we’re taking care of that every day on the field and in the weight room.”

The Red and Blue team will play next on October 8th when they take on Cedar Park at Bible Stadium after a bye week next week.