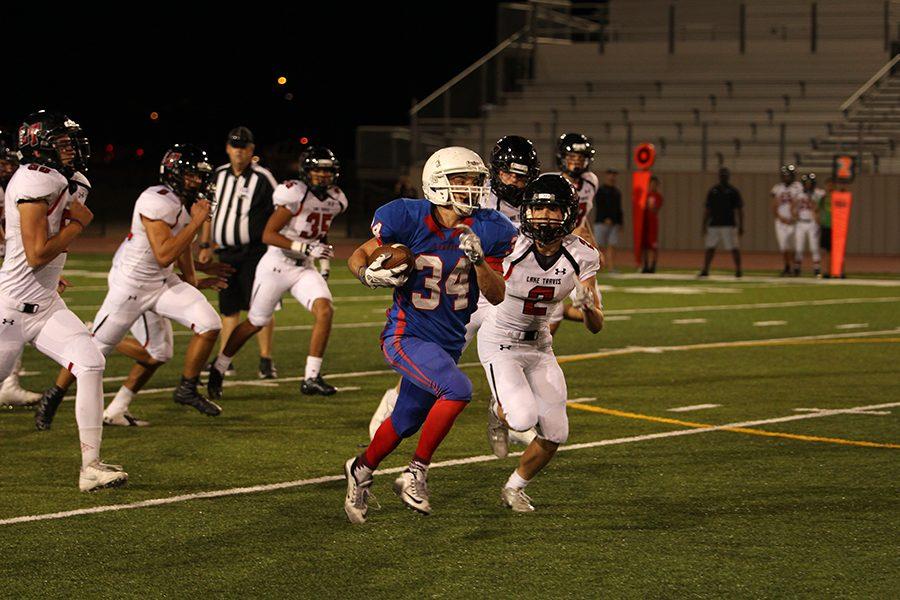 Sophomore running back Adison Larue breaks past the Lake Travis defensive line. Larue had his first scoreless game of the season against the Cavaliers.

The Lions were away in Buda to play Hays Rebels on October 13 and despite putting up a fight, both teams were defeated with red losing 0-29 and blue losing 13-38. They then combined to face the Lake Travis Cavaliers at home on October 20, but were shutout in a 0-43 loss.

“It’s hard to come off with more losses, especially this late in the season,” junior wide receiver Kaleb Simmons said. “We just have to do well to finish the season.”

The Lions were back at Bible to face the Lake Travis Cavaliers. Faced with a top-ranked team, the Lions struggled to move the ball and defend against the Cavalier offense.

“They just got the best of us,” junior linebacker Dyson Jones said. “We played well, but they played better.”

The Lions were unable to ever find a lead and after six touchdowns, the game ended in a complete 0-43 shutout.

“Overall I thought our kids did a great job of not giving in,” head coach Grayless said. “They fought all the way until the end and they never stopped putting in effort.”

The Lions had been away in Buda and faced the Hays Rebels. Red played first, but were unable to find the end zone, while the Lion defense was unable to prevent the Rebels from reaching their own end zone. The game ended 0-29, Lions down.

“It never feels great to lose without scoring,” junior running back Roland Ramsey said. “We just have to keep playing and we have to fight to find the end zone.”

Blue then took the field and much like the red team, the Lions struggled to hold back their opponents. Sophomore running back Adison Larue scored two touchdowns, but it was not enough to bring them to victory. The game closed at 13-38 in favor of the home team.

“We just didn’t play our hardest and we didn’t do the best we could,” junior wide receiver Morgan Rosseisen said. “We’ve got two games left and we just have to play hard to finish well.”

The Lions will be away at the Westlake Chaparral Stadium on Thursday. Red team will begin play at 5:30 and blue will begin at 7:00.