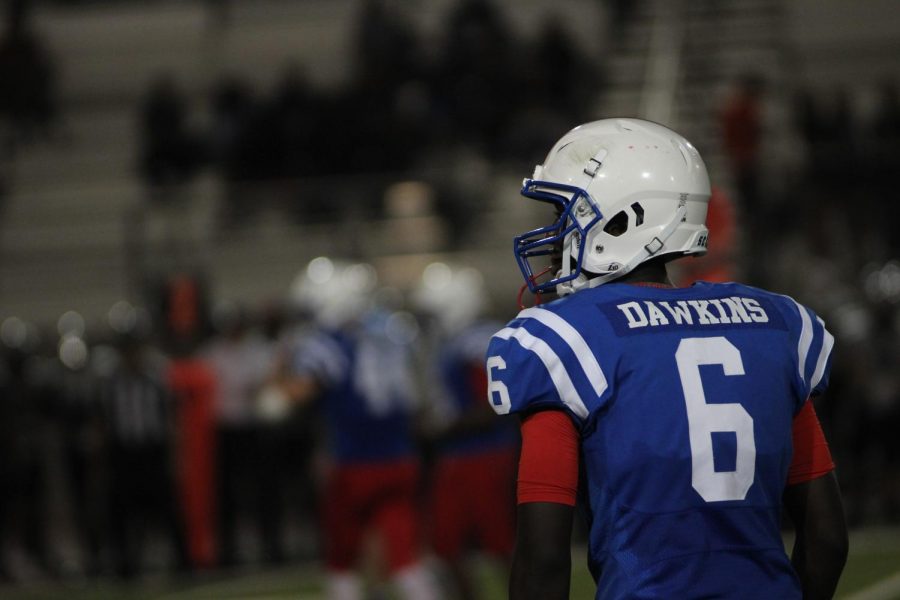 Titus Dawkins (6) lines up as a defensive back.

The Leander Lions lost to the Hendrickson Hawks 0-45 in their homecoming game.

“We played our hearts out like we do every game,” junior Keon Leonard said. “I had a chip on my shoulder as a starter, which is something you need.”

The Hawks quickly got to an 18 point lead in the first quarter. The Lions struggled on offense to get first downs and get their run-heavy offense going. In the second quarter, Lion’s defense did their part by only allowing 6 points but the offense was shut down by the Hawk’s stubborn defense. By the end of the first half, the Lions were down 0-24.

“We were having a lot of missed assignments as a team,” senior Adison Larue said. “We need to practice perimeter blocking with our receivers this week to fix our mistakes.”

The Lions needed to get their offense going in the second half to comeback against the Hawks. Instead, the Hawks began to build upon their lead by getting two touchdowns in the third quarter to bring the score at 0-38. The Lions were forced to punt nearly every drive and unable to score any points the entire game. The Hawks put up one more touchdown in the fourth quarter to solidify their win.

“We just have to get ready for Vista Ridge,” Leonard said. “They’re just another team on our schedule and they don’t know what’s coming.”

The Lions are now 1-4 on the season 0-3 in their home games. The Lions will play their next game against the Vista Ridge Raiders at Gupton Stadium. General admission is $9 for students and adults.