Lions Blown Away by Eagles 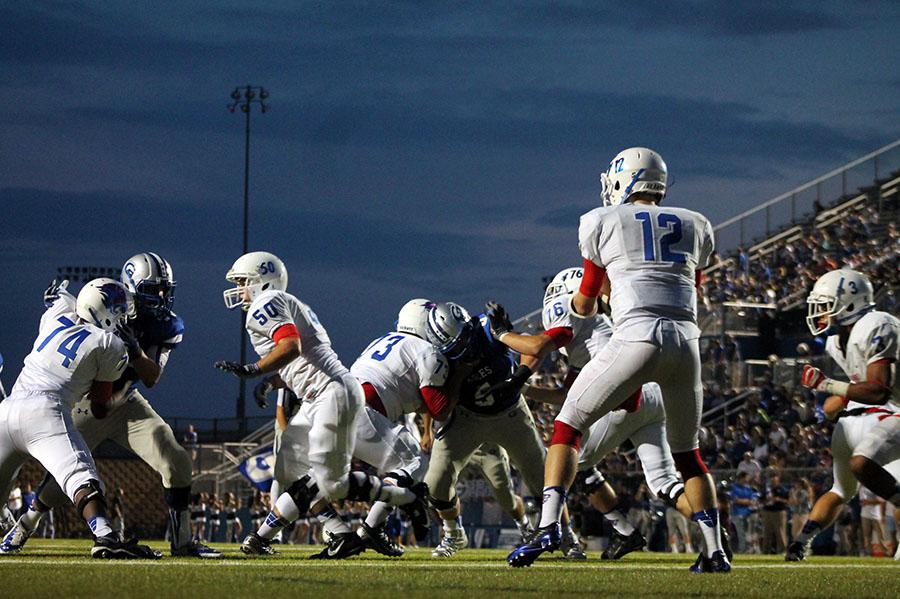 Hopp readies himself for the play

The Lions lost their game to the Georgetown Eagles, ranked ninth in division 5A, 32-13 on September 19.

The game began with the Eagles kicking off to the Lions with junior Tate Hancock running the ball to Georgetown’s 48 yard line. About three minutes in, sophomore Kyle Murdock made a field goal for the Lions, giving them the lead, 3-0, over Georgetown.

“I knew it was going to be a tough game from the start, but as with any opponent, they’re not unbeatable,” senior wide receiver Mikael Dawkins said, “so if we just play the game right, we can top them.”

“It gave us a lot of confidence, and it felt like we’re just coming back and we were going to go for victory,” Dawkins said.

To start the second quarter, the Eagles had possession of the ball and scored a field goal within 45 seconds, quickly making the score 10-9. After a kick off return by Hancock, 3 downs, and a flag, the Lions had to punt to Georgetown who kicked another field goal, taking over 12-10. The Eagles kicked but were called on a false start, giving the Lions the ball on the 34 yard line. On a first down, senior runningback Darian McClatcher ran the ball in for a touchdown. However, it was called back due to a holding on the offense, making it a first and 18 for the Lions.

“I was upset that the touchdown got called back, but at least my team was still trying to block for me,” McClatcher said, “and they were trying their hardest, so really that’s what matters.”

The Lions were unable to make another touchdown and had to punt to the Eagles where the ball went out of bounds on the Lions’s 44 yard line. With 1:11 left in the quarter, Georgetown scored and the extra point was good, making it 19-10. After a kick, the Eagles intercepted Hopp’s pass and ended the half.

During halftime, both bands and dance teams performed their shows. The Blue Belles performed to Daft Punk’s Get Lucky, and our band performed, for the first time, the entire show of Color Study in uniform.

“[We were told] just to keep on fighting because the past couple of games we came out the second half flat, and not really too much confidence usually,” Dawkins said, “so we were told that as usual and just to keep on playing because, you never know, the game could change at any minute.”

The second half began with the Lions kicking to the Eagles as determined by the coin toss at the beginning of the game. After having the ball in possession for about three minutes, the Eagles took a timeout on a 4th and 1 on Leander’s 27 yard line. They went for it and got the first down, and later scored another field goal, making the score 22-10 over the Lions. After three minutes of Lion possession, the Eagles intercept Hopp’s pass and is flagged due to unsportsmanlike conduct on Georgetown, starting the ball on the 30 yard line. The quarter ends with Georgetown leading 22-10.

“On the sideline it was heartbreaking because we knew it better than the team,” McClatcher said, “but we just couldn’t get over that hump.”

To start the final quarter, Murdock kicked a field goal for the Lions, making the score 22-13. The ball was punt back and forth four times before the Eagles scored a touchdown. The extra point was good making it 29-13, leaving 5:40 in the game. In about 27 seconds, Hopp was taken out of the game and sophomore backup quarterback Parker McNeil was put in. In a minute, the Lions took a timeout on a 4 and 10 on the Eagles’s 28 yard line. The Eagles were forced to punt and landed on the Leander 14. Georgetown intercepted McNeil’s pass and kept the ball on their own 18 yard line. With eight seconds left on the clock, a timeout was called with Georgetown on their second down with 6 to go on the Lions’s 6 yard line. The Eagles decided to punt, ending the game 32-13.

The Lions stay at home to take on the Vandegrift Vipers September 26.

“Mainly this game is gonna be redemption because we didn’t play that well last year, so we’re all coming back looking for a good game,” Dawkins said. “Now playoffs [are] on the line.”