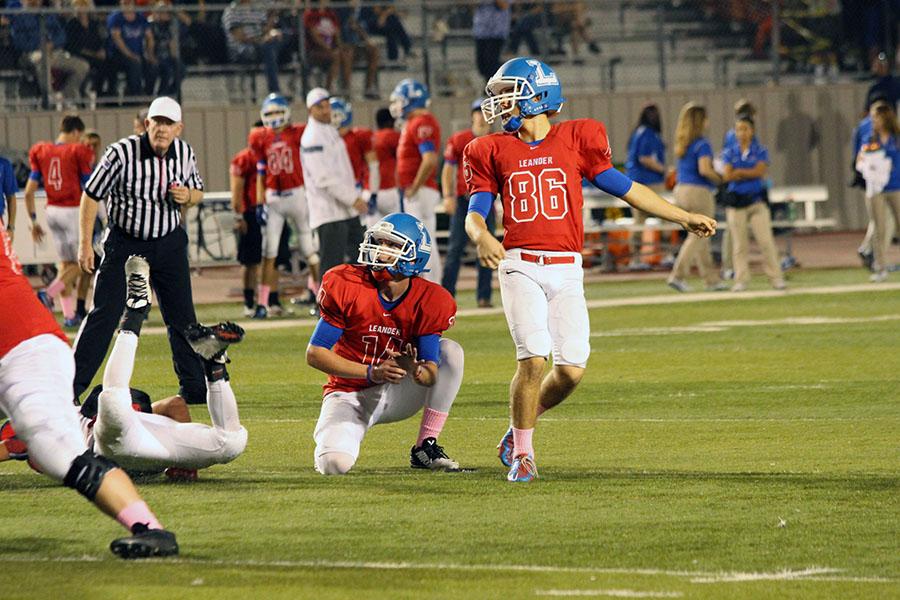 Sophomore Kyle Murdock kicks the ball for a point after touchdown

The Lions lost to the Georgetown Eastview Patriots 45-41 in another close game with a record of 0-8.

The ball was kicked to the Patriots and stopped on their 43. In the first 45 second of the game, Eastview ran the ball in for a touchdown, and the extra point was good, 7-0. On the first down for the Lions, sophomore quarterback Parker McNeil threw the ball for an interception resulting in a Patriots score with a point after touchdown, 14-0.

“There was still the pressure of winning and showing everyone, the whole town really, of performing a good game,” junior tight end Michael Berry said. “The pressure is always going to  be there, so it’s a matter of just how we can respond.”

With a touchback, the Lions began on their 25 yard line and quickly moved into Patriot territory. After a pass interference on Eastview and the ball moved half the distance to the goal, the Lions scored a touchdown run by senior runningback and wide receiver Darian McClatcher. The extra point was good, making the score 14-7. The ball, after being kicked to the Patriots, was nearly intercepted by junior defensive back and safety Matthew Long. Soon after, junior Pedro Silva intercepted the ball and landed on the 26 yard line. With 26 seconds left in the quarter, Parker made a touchdown run, tying the game 14-14.

“We came back and we tied it, and played with them for the whole game,” McNeil said. “It boosted my confidence for sure.”

It took the Patriots about two minutes to score their first touchdown in the second quarter, extending their lead to 21-14. After another touchback, the Lions returned the score with a touchdown run. Scores went back and forth throughout the rest of the half, including a touchdown run by junior runningback Raymond Gibson for the Lions, but ended with a close score of 35-27.

“We knew it wasn’t over,” McNeil said. “We just started slow and knew we had to finish fast.”

During halftime, the Homecoming court was introduced to the audience. It began with the freshmen Duke and Duchess and ended with the senior prospects for royalty. The Queen was announced as Tyler Banks and was accompanied by King Ben Douglas.

The Lions received the ball for the second half and soon punted to the Patriots. Punts were traded back and forth between the two teams until McNeil made a touchdown pass to McClatcher, 35-34. The Patriots soon returned the score with a field goal, 38-34. With two minutes left in the quarter, McNeil made a touchdown pass to Berry, taking the lead 41-38. This would be the last score for the Lions in the game, and would be the final score for the quarter.

“Whenever I saw the ball coming, I knew I had it,” Berry said, “and I had to get in the endzone.”

Eastview soon scored a touchdown, making it 45-41, but neither team went down without a fight. Silva recovered a fumble on the Lions’s two yard line. The Lions kept up with the first downs, but were unsuccessful in the last two minutes where they would have to hand the ball over to the Patriots on a failed fourth down. Ending the game in victory formation, the Lions lost 45-41.

“Everyone loves to see an underdog,” Berry said. “I think we prepared really well for this week for the game, so it’ s just a matter of us going out and performing. Playing our game like we played the past two games and just finishing the game with a win instead of a loss.”

There are two games left for the boys. Their next is against Vista Ridge who were defeated by Georgetown 50-42 in their last game. The final game is against Dripping Springs for Senior Night on November 7 at 7:30.