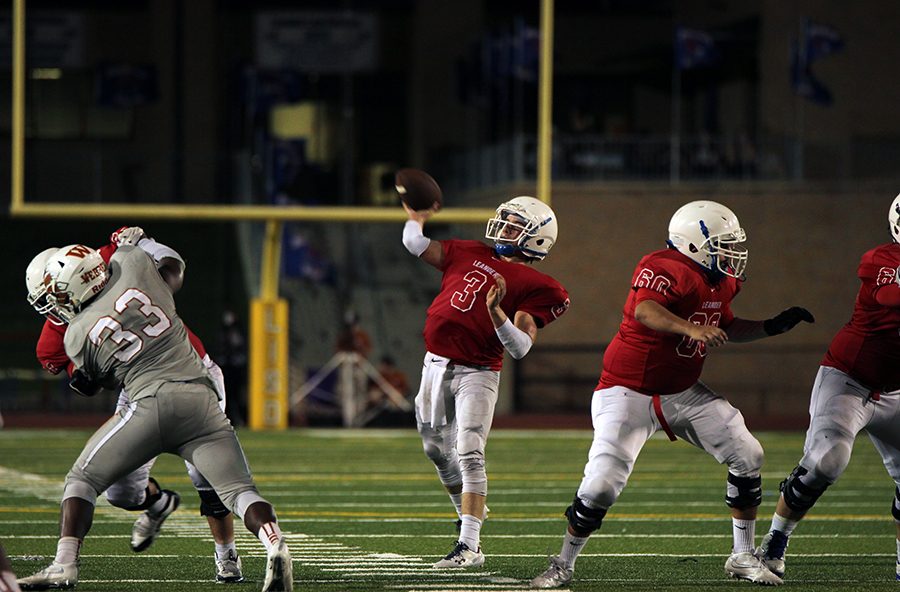 Senior Kyle Irlbeck throws a touchdown to junior Dalton Flowers. This touchdown put the team ahead.

The varsity Lions defeated the Westwood Warriors in the season home opener with a score of 28-24.

The game started off with a tribute to Officer Amir-Abdul Khaliq, senior Mati Abdul-Khaliq’s father, who unfortunately passed away recently. To commemorate him, the game started with a moment of silence for him while balloons were released.

“It just showed the impact my father had on people and how much amazing support I get here at Leander,” Abdul-Khaliq said.

The game kicked off and the Warriors came out and scored a 10-yard pass which put them up 7-0. The Lions charged back and scored after senior Kyle Irlbeck threw a pass to junior Dalton Flowers to make the score 7-7 after senior Kyle Murdock’s extra point. Senior Seth Venner intercepted the ball near the end of the half but the offense wasn’t able to capitalize on their field position and turned the ball over off an interception. The first quarter ended with the game tied 7-7.

“I thought we started well,” senior Jai Garcia said. “We executed on both sides of the ball. Our defense was able to stop their offense, and our offense was able to put some points on the board and that’s always fun.”

The Warriors got on the board first again when they scored under four minutes into starting the second quarter. The Lions fumbled the ball on Westwood’s own 8-yard line but got it back after Flowers intercepted a pass. They scored on the following drive after Irlbeck rushed for a touchdown to tie the game 14-14 and close out the half tied.

“It definitely opened our eyes but remained calm [going into halftime tied],” Garcia said. “We had them where we wanted them and we knew we could take over the second half.”

The Warriors got out on the front foot again and scored another touchdown to make the score 21-14, shortly after they scored a field goal after being stopped by the Lions on their own 8-yard line and the third quarter ended 24-14 Warriors.

“We stopped Westwood from scoring in the third because our tackling was good and our blitz’s were really hitting and they didn’t have a response,” junior Alex Williams said. “Our defense was determined to get more turnovers to help out our offense.”

After Westwood missed a 35-yard field goal the Lion offense charged down the field. They went for it on fourth-and-1 and got the first down and soon after Garcia rushed for a touchdown to bring down Westwood’s lead to 3 points at 24-21 with 8:08 left in the game. The Warriors gave up the ball and the Lions raced down the field, completing four first downs in a row. Irlbeck combined with Flowers for their second touchdown of the night to put the Lions up for the first time in the game, 28-24, with 3:45 left in the game. Murdock kicked off and the Warriors came down the field to win the game and completed a deep pass to a receiver before Abdul-Khaliq and Venner forced a fumble and recovered it inside their own 5-yard line. The game ended two minutes later and the Lions had come from behind to win 28-24.

“It was awesome, so many emotions going around and it was just an awesome atmosphere,” Williams said. “We’re staying focused and have had a great four practices so I think we’re in good shape for Friday [against Stony Point].”

Varsity’s next game is against Stony Point at Bible for the homecoming game starting at 7 p.m.