Taking it One Game at a Time

Lions miss an opportunity against Killeen 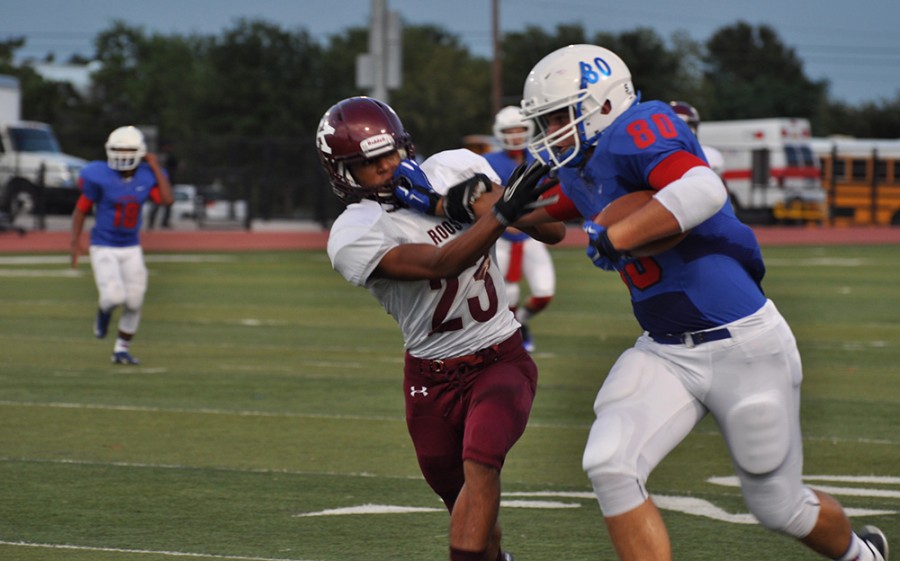 Junior Michael Berry stiff-arms his opponent on his way to score the first TD of the season during the first quarter vs. Killeen.

After a last minute defeat by the Killeen Kangaroos, the Lions will travel to Kuempel stadium to battle the Pflugerville Panthers.

Late in the first quarter, junior tight end Michael Berry scored the first touchdown of the game. The extra point was good, the Lions lead 7-0. The quarter continued with no score until 43 seconds remained on the clock and Killeen kicked a successful field goal, changing the score to 7-3 with the Lions in the lead.

“Honestly I thought we would come out with a win,” senior quarterback captain Brandon Hopp said. “We had seen their film and knew what they were going to do.”

The second quarter began with the ball in Leander possession. The boys made their way down the field until Hopp made a one yard touchdown run with about nine minutes remaining on the clock. A two-point conversion was attempted, but unsuccessful, the Lions lead 13-3. To end the half, the Kangaroos kicked two field goals, the score 13-9 in Leander’s favor.

After kick off, an interception by Hopp, and a Killeen punt, senior running back Darian McClatcher scored a touchdown for the Lions, and an extra point followed, Lions lead 20-9. This, however, would be the final point gained by Leander. The Kangaroos continued to fight back, eventually scoring a touchdown, 20-16 to the Lions.

“I broke my hand,” Hopp said, “so it kind of limited what we could do on offense and so it was harder for us to move the ball and go with the game plan that we had.”

In the final quarter, the scoreboard went unchanged until 24 seconds remained on the clock. Killeen ran the ball in for a touchdown. Without fail, the Lions tried to score, but ran out of time. The game ended, 23-20 to the Kangaroos.

Hopp will be playing in the game against Pflugerville, who lost their game last week to Austin Bowie 14-13.

The game will be at Kuempel Stadium at 7:30 p.m. Tailgating will be from 6-7.  For more information, visit the official Leander football website. Good luck, Lions!