Race Against the Horse Power 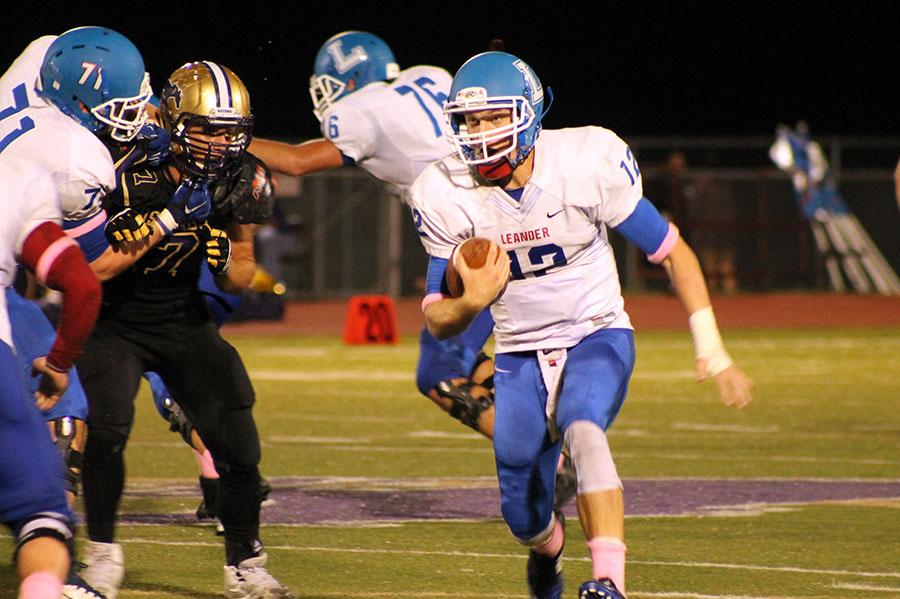 Senior quarterback Brandon Hopp on the keep for the Lions

The Lions fell to the Marble Falls Mustangs 49-46 October 17. The entire game had a close score, but the Mustangs pulled through in the last 17 seconds.

The first touchdown went to Marble Falls when there was 7:59 left in the quarter. The extra point was good, starting the game quickly with 7-0. The kick was received and run by senior runningback Darian McClatcher to the Lion 34 yard line. After a first down for the Lions and a flag on the Mustangs putting the ball on the 26, McClatcher ran the ball in for a touchdown, and sophomore kicker Kyle Murdock kicked the extra point, making it 7-7. After trading the ball back and forth with 1:05 left, sophomore quarterback Parker McNeil threw an interception, but the offense took down the Mustangs on the Lion 34 with a tackle by McClatcher.

“It gave us good vibes,” McClatcher said. “The whole team was very excited that we scored, and we knew we could do it if we put our mind to it.”

The second quarter started with the ball in Mustang possession, but was quickly kicked to the Lions. The ball went back and forth until Marble Falls scored a touchdown, making it 14-7. After the Mustangs recovered a dropped snap and a punt to the Lions, Marble Falls scored another touchdown. The Lions returned their touchdowns with a field goal by Murdock, 21-10, which would end the scores for the half.

“Going into halftime, coach gave us a very good speech and a very good pep talk, and he hyped us up,” McClatcher said. “It was either win or lose, so we went into halftime knowing we could do this. We were focused and ready to do what we had to do to win.”

The Lions kicked to the Mustangs who scored a touchdown in the first three minutes, starting the quarter off with a score of 28-10. After a series of penalties on both teams consisting of holdings, passing interference, and unsportsmanlike conduct, senior quarterback Brandon Hopp threw a touchdown pass to McClatcher. The extra point was good, closing the gap between the scores 28-17. The Lions kicked to the Mustangs who later received a penalty, making it 1st down and 18 on their eight yard line. They got the first down on the 49, but fumbled the ball which was recovered by senior line backer Dave Alfaro. From the recovery, junior runningback Raymond Gibson ran the ball in for a touchdown, but it was called back due to a holding call on the Lions. The quarter ended 28-17.

“We had our backs up against the wall and we had to keep our foot on the gas pedal and keep going,” Hopp said.

The last quarter began with Lion possession, and soon resulted in a touchdown run by Hopp. The boys tried for a two-point conversion and were successful, making it 28-25, the Mustangs still in the lead. Once Marble Falls had the ball, they fumbled and junior Pedro Silva recovered. However, the Lions fumbled after that and the Mustangs scored and the extra point was good, extending their lead to 35-25. Junior Ty Worthy returned the ball to the Lion 37. McClatcher made the first down, and junior tight end Michael Berry caught the touchdown pass from Hopp. The PAT was good, 35-32.

“Over the week we really focused on our opponent and what we needed to do to accomplish the goal that was at stake,” Berry said.

The Lions play Georgetown Eastview for their Homecoming game October 24.

“We were a team, we played as a brotherhood, that what made this game different from all the other games,” McClatcher said. “We played as a team and we worked really well together.