Rounding up the Rangers 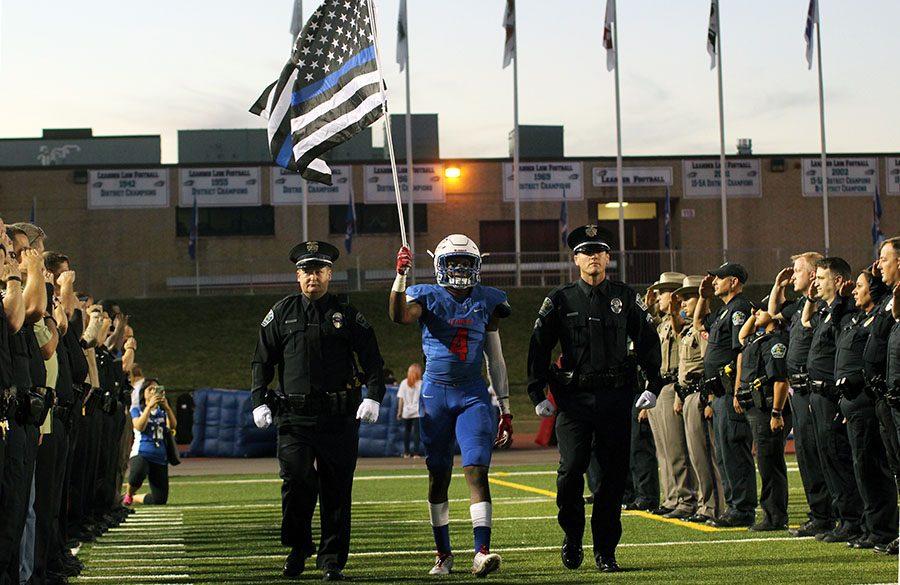 Senior Mati Abdul-Khaliq walks out during a tribute for his father Amir Abdul-Khaliq. It was held before the game.

It was the normal start of all the Friday night football pregames, vibrations of the fight song from the band, the shushing sounds of the fire extinguishers and the buzz of the students and parents in excitement. But this night was different. Flanked on both sides by white-gloved officers, senior Mati Abdul-Khaliq emerged from the tunnel, carrying the flag his coach had given him when his father passed away. Red, white and blue lights from the police motorcycles flickered across the field, officers stood at attention, the sun set behind the flag pole. A fitting tribute for a father and officer.

“I knew that they would have a tribute, but it was nothing I could have ever imagined,” Abdul-Khaliq said. “More than anything, it made me feel proud of who my father was and how many people he affected in a positive way through the community through the service he did for our country. I’m extremely grateful for the Austin Police Department and everyone who orchestrated the whole tribute. It was really amazing!”

After the tribute, the team began their first district game against the Vista Ridge Rangers that resulted in a 44-28 victory.

“We had a real good idea of what we wanted to run and we felt that we could get Rashad [Carter] loose in the middle,” head coach Tim Smith said. “The kids did a really good job executing and making plays and carrying out that plan.”

After the first drive of the game, senior Kyle Murdock kicked a 24-yard field goal to put the first points on the board. The Rangers answered with 2:38 left in the 1st quarter off a pass play into the back corner of the endzone. Their next offensive possession two and a half minutes later junior Jacob Taute rushed for a touchdown to end the 1st quarter, leading 14-3.

“In my head I never had a doubt that we would win the game going into the 2nd quarter,” sophomore Rashad Carter said. “[Being] down just gave the team a reason to fight hard and play hard.”

However, the team responded in the 2nd quarter with junior Colt Davis scoring after Carter’s pass. The extra point was blocked, but the next drive the defense intercepted the ball on Vista’s 10-yard line and senior Jai Garcia finished the drive off on a 1-yard touchdown to end the half with the Lions back up 16-14.

“[I think the defense performed] well,” junior Noah King said. “We put the quarterback on the ground 31 times and forced three turnovers, so I think we pretty much stopped whatever they wanted to do to us.”

The Lions came out of halftime with a lead, but extended it even further when Carter rushed for a touchdown and added a two-point conversion. The third quarter ended with a 30-14 lead following an interception by King returned for a touchdown.

“We just rolled the coverage to the motion and I saw my chance and took it,” King said. “Immediately afterwards I knew that the game wasn’t over yet and it was time to get back to work the next possession.”

The defense forced the Rangers to fumble on their own 12-yard line and Garcia rushed the ball in for another touchdown to put the score at 37-14. Vista Ridge scored and failed to convert a two point conversion, but the offense responded with a rushing touchdown by Carter to put the lead at 44-20. The Rangers finished the scoring with a touchdown and a two point conversion to end the game 44-28 with the team securing their first district victory of the year.

“[Vandegrift] do a really good job at defense they’re real aggressive so we need to take advantage of that,” Smith said. “Someone’s going to step up and it’s going to be a really good low scoring game.”

Up next the Lions will play the Vandegrift Vipers on Friday at 7:30 p.m. away at Vandegrift High School.