Stung by the Vipers 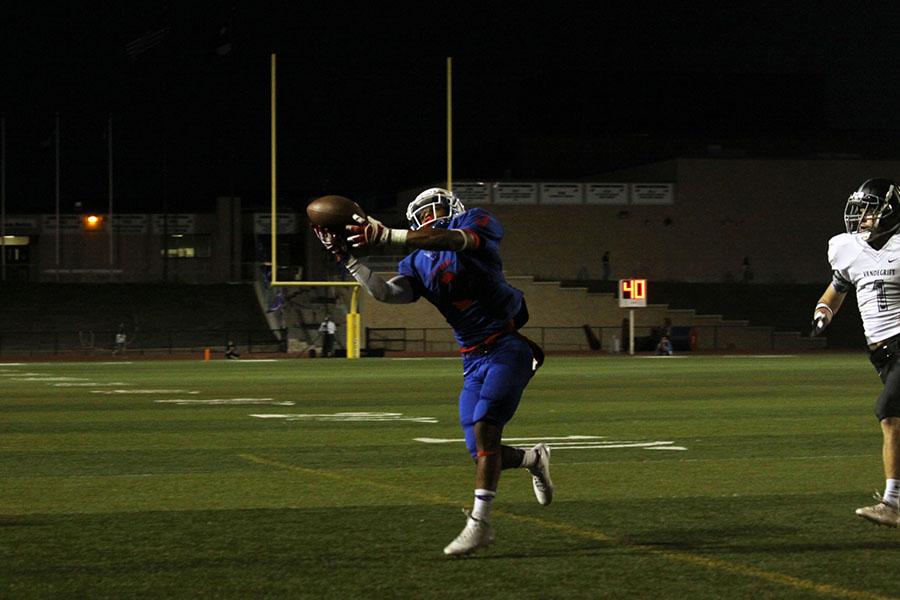 Senior runningback Darian McClatcher bobbles the ball in the endzone

The varsity Lions lost their game to the Vandegrift Vipers 56-27.

The first quarter was full of turnovers, but the Lions were the first to score with 5:43 left. Defense held the Vipers to 3 and out, 1st and 10 at the 19. Senior runningback Darian McClatcher ran down the sideline for a 21 yard gain. After a chop block penalty, Hopp completed his pass to junior Michael Berry for 21 yards.

“Offense did better than they have in the previous weeks,” junior runningback Pedro Silva said, “and so we’re just ready to take what we learned from that game and bring it on next week.”

On third down, Hopp kept the ball for a first on the 48. The Lions made their way down to the endzone until they were 3rd and 2 and McClatcher ran the ball in for a touchdown. The extra point was good, the Lions lead 14-0 end end the quarter.

“We had a lot of guys step up like Mikael Dawkins, Brandon Hopp played well,” Silva said, “Darian McClatcher is always one of the best players on the field, and O-line really stepped up.”

To start off the second, the Vipers scored a touchdown run, and followed with another touchdown, leaving 6:47 in the half, and tying the game. After kickoff, the Vipers recover the ball and takes over, making a drive down the field for a 21-14 over the Lions. The Lions took the ball at the 39, but the Vipers picked it off and returned for a touchdown. At halftime, Vandegrift leads 28-14.

“We made a lot of mistakes and we were just saying that we’ll get them next time,” McClatcher said.

On the opening drive of the second half, the Vipers score, but the Lions returned with a touchdown of their own by McClatcher.  With 3:25 remaining, Vandegrift scores and leads 42-21. The Lions punt the ball, which is blocked, and scores two plays later on a quarterback sneak. To end the third, the Lions score a touchdown but miss the extra point, making the score 49-27 to the Vipers.

No scores occur in the fourth quarter until 6:31 remains, and the Vipers lead 56-27. This is the final score of the game, another loss for the Lions.

“We haven’t won a game yet, but every game has been there,” Silva said. “We haven’t really been beat yet, we’ve been beat by ourselves, so this bye-week is really gonna be better for us mentally as we have an extra week to prepare, eliminate our own mistakes because our biggest opponent right now is us; if we get past them, there’s no limit.”

The Lions will continue their season against Cedar Park on October 10 at 7:30 at home. Good luck, Lions!