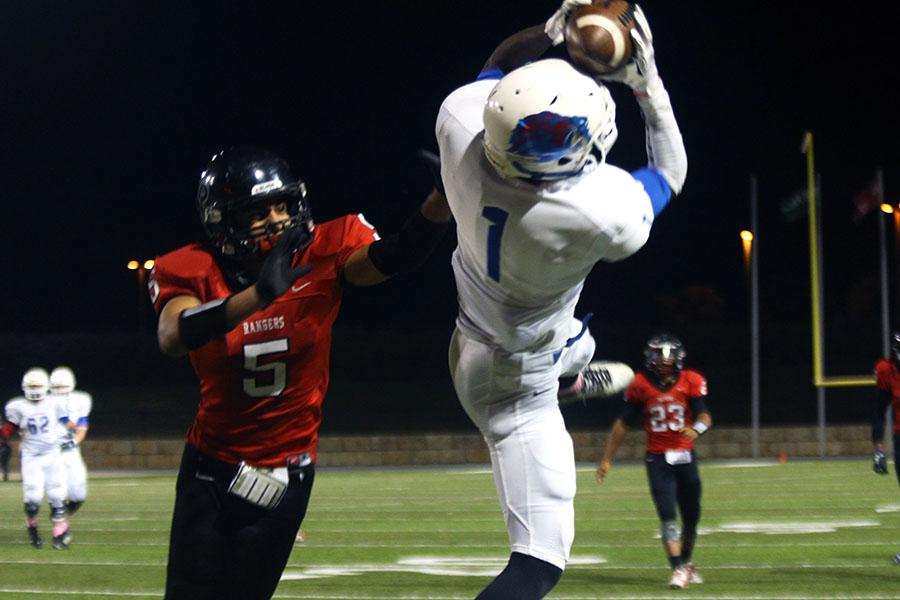 The Lions fell to the Vista Ridge Rangers, currently ranked 17th in the 5A division, 45-24.

The kick to the Rangers landed on their own 39 yard line, and it took them about five minutes to score their first touchdown, 7-0. The kick was followed by a flag, unnecessary roughness, by the Lions, making it 3rd and 14 on the Lion 14. They punted to Vista and landed on the 39. After a punt by the Rangers due to an illegal substitution on Vista, the Lions kept the ball until the end of the quarter, making no gain, 7-0 to the Rangers.

“We knew they were doing pretty good, they only had one loss, and that was pretty intimidating,” senior wide receiver Mikael Dawkins said, “but we made sure we gave it all we got until the very end.”

Vista scored a touchdown run and an extra point, making it 14-0. The teams traded punts back and forth until senior Brandon Hopp, playing as a receiver and runningback, ran the ball in for a touchdown.

“It was very strange,” Hopp said. “I’ve never played runningback before, and I haven’t played receiver since middle school, so it was different.”

The extra point was good, and the Lions closed the gap 14-7, leaving 3:48 in the quarter. This was returned by the Rangers a minute later with a touchdown and an extra point, 21-7. With three seconds left in the quarter, the Lions kicked for a field goal and made it, going into halftime down 21-10.

“[In the locker room] we were talking about how our effort wasn’t as good as a team,” Dawkins said. “We had Marble and Eastview which were two very intense, close games, and we weren’t really showing that much intensity in the game.”

To start off the second half, the Rangers kicked to the Lions, landing the ball on their 30 yard line. After a turnover, Vista scored a touchdown. This was followed by another Ranger touchdown after a Lion punt. The quarter ended with a first down pass to junior tight end Michael Berry on the eight yard line, the score 35-10 with the Rangers in the lead.

Within five seconds, the Lions fumbled the ball, but it was recovered touchdown by Hopp. The extra point was good, and the gap shortened 35-17. Vista tried to make their way down the field for a touchdown, but ended up with a field goal. The Lions returned the ball to their own 39. In four minutes, Dawkins caught a touchdown pass from sophomore quarterback Parker McNeil, and the extra point was good, making it 35-24.

“I wasn’t having that great of a game,” Dawkins said, “so just having that…I was glad I could participate and help out the team anyway I could.”

The Lions take on Dripping Springs for their final game and prepare to say goodbye to their seniors.

“It’s kind of starting to set in that this is the last time I’ll ever dress up in a red, white, and blue jersey, I’ll ever be on this field playing,” Hopp said.