The Battle for Bible 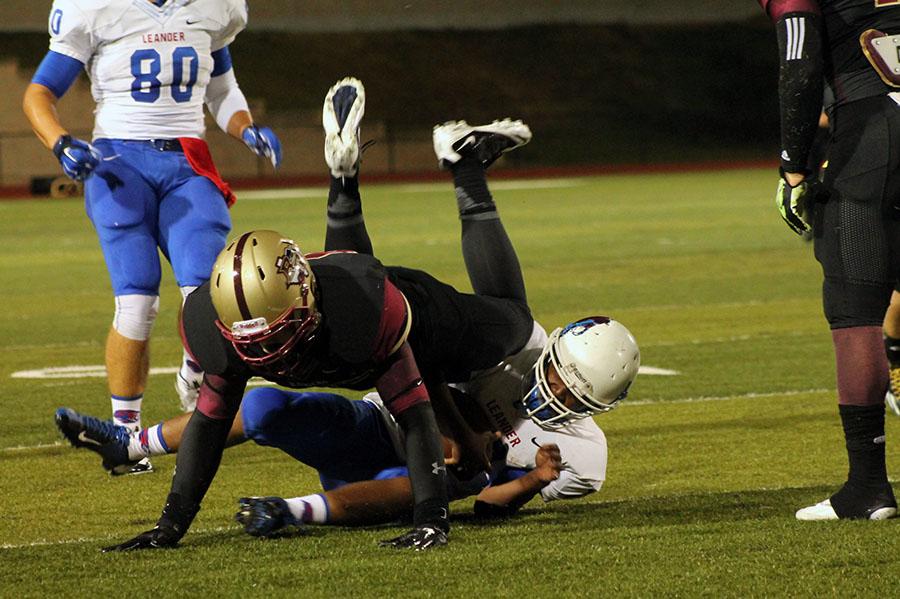 After an 0-2 start to the season, the Lions played their newest rival: the Rouse Raiders. The game began after an hour delay due to weather, and later took a slippery turn early in the game.

“[The weather] made it slicker out on the field, some people were slipping around,” senior captain defensive end Jacob Hanawalt said. “The game got delayed an hour, so a lot of people that were hyped up ended up not being as hyped.”

The Lions kicked off to the Raiders who kept the ball until 7:23 was left on the clock and they fumbled. The ball was recovered by the Lions on their own 30-yard line.

“That was my third turnover of the season and I knew that it was going to give our offense a chance to score,” senior defensive tackle Caleb Gonzaba said.

One false start and a low snap later, it was the Raiders’s ball on their own 32. Soon after, they scored a touchdown and successfully managed a two-point conversion, taking the lead. After the kick return by senior runningback Darian McClatcher, the Lions reached a fourth down with seven yards to go and decided to attempt a field goal. It was good, the score 8-3 to Rouse. The Raiders kept the ball in their possession until the end of the quarter without score.

The second quarter began and about 50 seconds in, Rouse fumbled, and the Lions recovered the ball. Soon after, the Raiders intercepted the ball, but were flagged with an offsides call. About two minutes later, the Lions scored a field goal, making the score 8-6 to the Raiders. With 5:44 left on the clock, Rouse was faced with a fourth down and 8 to go and attempted a pass, which was blocked by the Lions who were called on pass interference, a first down on the Lions’s 16 yard line. This was followed by a time out  and a touchdown by Rouse. The extra point was good making the score 15-6. Two minutes later, the Raiders were in possession of the ball and scored another touchdown. They went for a two-point conversion, but a false start was called and they decided to attempt an extra-point instead, making the score 22-6, the last score of the half.

“We had only had a couple plays put onto us as a defense,” Gonzaba said, “so our thoughts going into the locker room were we were going to come out really strong in the third quarter and then our offense was going to score second half.”

After a halftime performance by the LHS band and Blue Belles, and absence of a performance by the Rouse band, the Raiders kicked off to the Lions, the ball on the Lions’s 29 yard-line. After a pass interference on Rouse with 9:40 left on the clock, the boys took an automatic first down on Rouse’s 18-yard line.  After a failed fourth down by the Lions and a false start by the Raiders, Rouse scored a touchdown and kicked for an extra point, making the score 29-6. Once the ball was in Leander possession, the Raiders scored a safety, changing the score to 31-6. The Lions kicked to Rouse and soon after scored a touchdown, the final scoring drive of the quarter. The score was 37-6 to the Raiders, and ended with the ball in Lion possession in Lion territory.

“I was cheering the team on the whole time telling them to keep playing,” Hanawalt said. “Being a non-district game, it’s like a practice, and practice only makes perfect.”

To start the final quarter, senior quarterback Brandon Hopp ran the ball in for a touchdown. The extra point was dropped, but the score bumped up to 38-12, Rouse leading. The Raiders, however, returned the touchdown, not wanting to give away too many points. This was the last scoring drive, ending the game with a Rouse win, 45-12.

Although the Lions did not win, according to the football website, several key Lions continued to improve. Gonzaba and Hanawalt led the defensive front with 4 and 9 tackles, respectively, while juniors safety Matthew Long and cornerback Chris Patek led the secondary with 11 tackles each. Gonzaba caused and recovered a fumble.

The Lions are now 0-3 and are away for their next game to take on the Georgetown Eagles. Good luck, Lions!