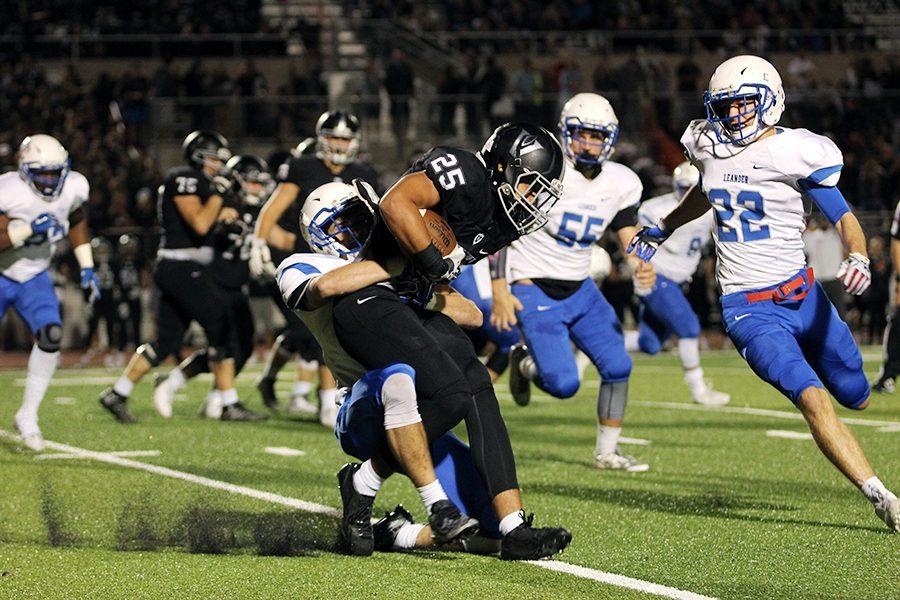 Junior Riley Harkleroad tackles a Vandegrift player. He had nine total tackles in the game.

The Vandegrift Vipers beat the varsity Lions in their second district game of the year 34-6.Offensive standout was sophomore quarterback Rashad Carter after he rushed for 31-yards and threw for 193. Junior linebacker Alex Williams led the defense with six solo tackles and 13 assist tackles for a total of 19 tackles.

“I feel like the defense played very well together as a team and didn’t make too many errors,” Williams said. “We executed and lined up properly and played longer and harder they did.”

The Vipers scored first after recovering a loose snap and minutes later drove down the field to complete a pass to an open receiver who ran into the endzone, the resulting kick was missed but they still led 13-0. With under two minutes left in the first quarter the Viper defense intercepted a pass by junior Coltin Mitchell and on the resulting drive converted a rushing play to end the quarter leading 20-0.

“I told the kids it was my fault,” head coach Tim Smith said. “The wind was blowing pretty good to the south and I deferred the kickoff. I should’ve kicked off because our defense is really good and I should’ve kept them pinned because I knew our defense would play well.”

The Lions offense started the second quarter on the Vipers’ 11-yard line and senior Kyle Murdock finished the drive off with a field goal to bring the score up to 20-3. Neither team scored for the rest of the quarter and the Lions went into the locker room trailing 20-3.

“We got on track [in the second quarter] and we have some young players on offense and once their confidence rises they become fearless so we got loose a couple times and started to complete some passes and when that happens it’s contagious,” Smith said. “We had more offense than they did but had four turnovers that led to touchdowns.”

“The wind was at my back so I had a big distance to hit from,” Murdock said. “But [the offense] did a good job getting me close for some easy points.”

Vandegrift capitalized on two Lion offensive errors in the 4th quarter to finish up the game. First by stripping the ball off junior Jake Egelsee to return for a touchdown and then gathering the ball in the endzone after a snap flew over Carter’s head. The game finished 34-6 to the Vipers.

“We really need to focus on not making stupid mistakes that we made against Vandegrift,” Egelsee said. “We had four turnovers translate to touchdowns for them. If you take those four touchdowns away, we have a completely different game.”

The Lions will play the Hays Rebels next Friday at Bible Stadium. Kickoff will be at 7:30 p.m.