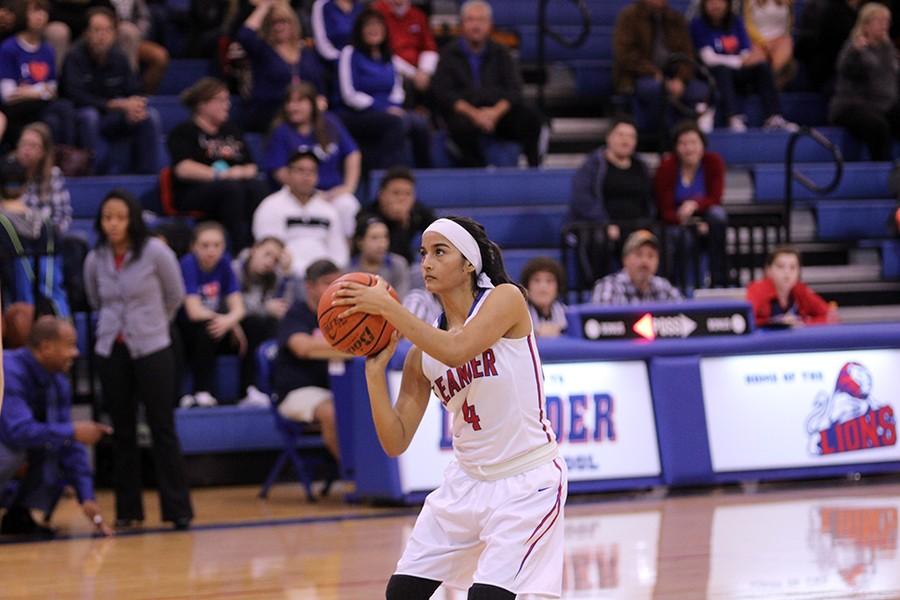 Senior Izaila Martinez begins to take a shot. She scored 10 points against Eastview.

After winning against East View 55-47, the Lady Lions faced Vista Ridge. Unlike Friday’s game, Vista Ridge came out on top. The final score against Vista was 64-34. In both the first and second half of the game, the team scored 17 points. Senior Rayanna Carter and sophomore Kassadie Sanders scored the most points out of the team, combined they made 22 points. Seniors Kylie Douglas, Izaila Martinez made a total of six points. Sophomore Allyssa McBeyers made two points and junior Alicia Molina made three points.

“We all kind of got frustrated and we were just rushing and kind of panicked during the game,” senior Rayanna Carter said.

The game against East View started with just four points in the first quarter but was made up for in the second quarter when the girls scored 20 points. The last two quarters were very close in points to East View but the points made in the second quarter pushed the Lions ahead. This win puts the team in the district’s top 4. Another thing that made the game a little different was the addition of the blue belles at half time.

“Cheerleaders have been there but never Blue Belles,” Sanders said. “They aren’t distractions, but they do help to encourage us on the floor and it’s very much appreciated.”

“We were down in the first quarter 8-0,” Sanders said. “Although we were down by however many points we never stopped working hard. We capitalized on every single mistake they made, which is what you have to do when you are as small as our team is. We kept our composure and never let them speed us up. We had our runs, they had theirs, and yet Leander came out with the win.”

The next game will be against Dripping Springs at 7:30 p.m. It will be held a home game, Friday the 22nd.