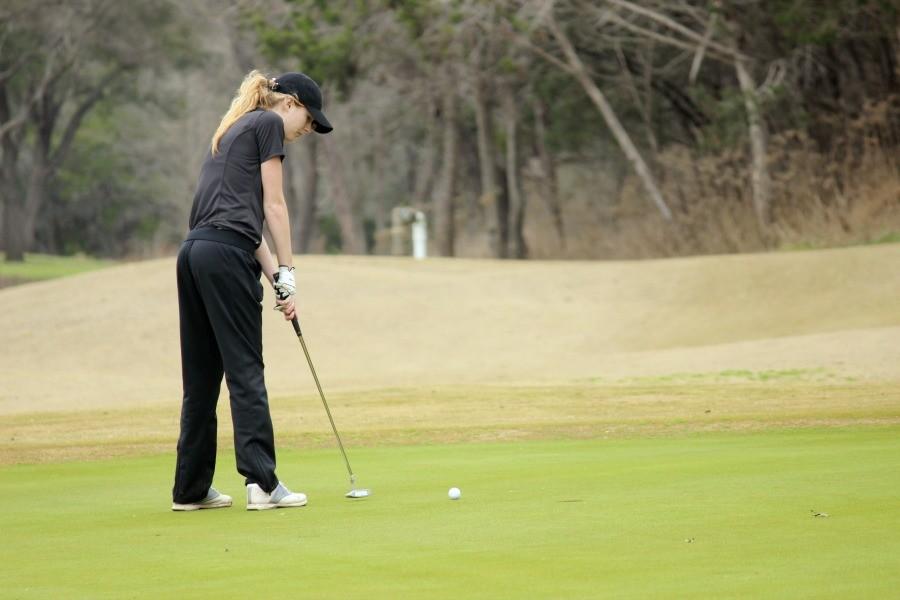 Sabrina Stafin putting it into the hole

For girls’ golf district starts on the March 31. So far their season has been full of improvement and achievements. At their last tournament in Bastrop the girls placed third.

“The course wasn’t in very good condition; the greens were like putting on concrete,” junior Katie Pitchford said. “Coach Michael went with us and he was calling them the browns because they definitely were not greens. I think considering the course conditions we still played pretty well.”

This season Pitchford has broken 100 and thinks that the rest of her team has been doing great as well.

“It’s the best that I’ve done before out of all three years playing,” Pitchford said. “This season has definitely been my best. I’m getting better, slowly improving.”

The last boys’ golf tournament in Burnet was more of just a practice for district.

“The course (in Burnet is) where we play district in two weeks, so it was really easy to get used to the course and figure out how it plays,” senior Graham Warner said. “I didn’t particularly play my best and neither did the team.”

Now that the boys have played on the district course they know how to do well at district.

“It is an easy course if you keep the ball in play (hit it in the fairway and not out of bounds),” Warner said. “If you’re not on top of your game it’s difficult, but if you are it’s a beatable course.”