In the Locker Room: Living With Injuries 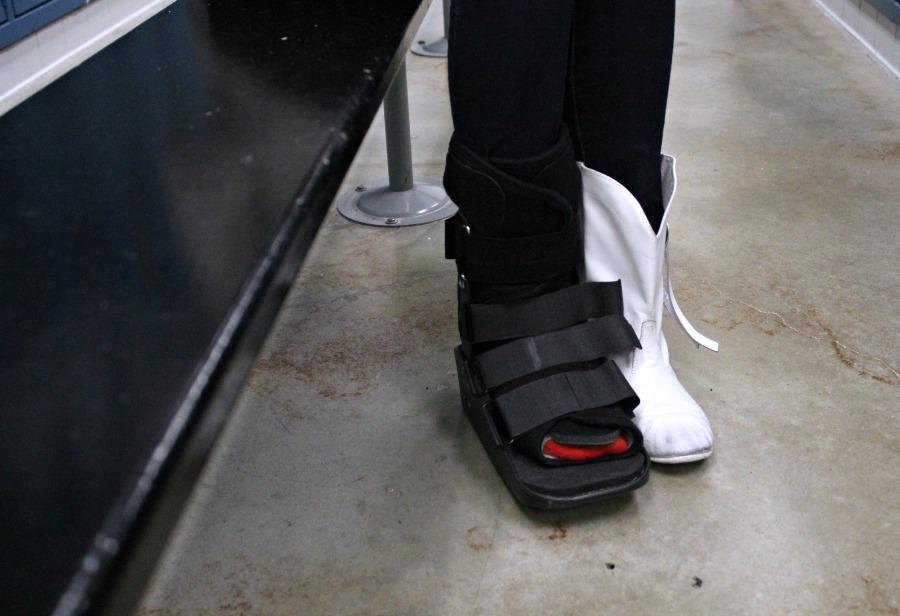 Sophomore Hannah Faubion broke her foot during a practice and now has to wear a boot.

Being a student athlete takes a lot of time and energy, and sometimes it takes more than expected. Numerous players are injured every year during school sports and have to sit out games and performances, but they still find a way to stay involved.

Injuries can happen at any time, at practices, games, performances, and outside of the sport as well. It’s always a stressful event, though, no matter where it happens. Athletes have to stay strong and do what’s best for themselves and their team.

“In April, I did a tilt jump and I dislocated my knee during Baby Belle period,” sophomore Blue Belle Felisha Gonzalez said. “I’m more cautious of what I do now and I may not do everything full-out, but it’s for the good. I don’t want to injure myself again. I may be disappointing my team sometimes but it’s because of my health; I don’t think I disappoint my team though, I’ve worked my butt off  to get where I am again.”

When injured, sometimes athletes are given different jobs on the team since they can’t work out and play with the rest of the team. Playing time is lost, but most injured athletes will say they work hard when they come back from an injury.

“Freshman year, I broke both my ankles, I broke my thumb, I had surgery on my knee, [and] I’ve had a concussion,” senior Lady Lion Basketball player Jordan Tschoepe said. “All my injuries are though basketball. I just play really aggressively. It just effects my playing time. I just got back from my knee problem because I just had surgery a few months ago and I’m not a starter. Eventually I’ll come back and get the time I want.”

Sometimes it makes a player stronger after they’ve had the learning experience of having an injury.

“In our [football] playoff game last year [against McCallum], I tore my labrum in my right shoulder,” senior football and baseball player Andrew Alaniz said. “During baseball I did the stat book and all I did really was just encourage the team. That’s all I really could do until the very end of the season when I could hit a little bit. It makes you really appreciate the game because watching all your friends play and have fun and you’re just sitting over there twiddling your thumbs, can’t do anything, makes you see a different side of the game.”