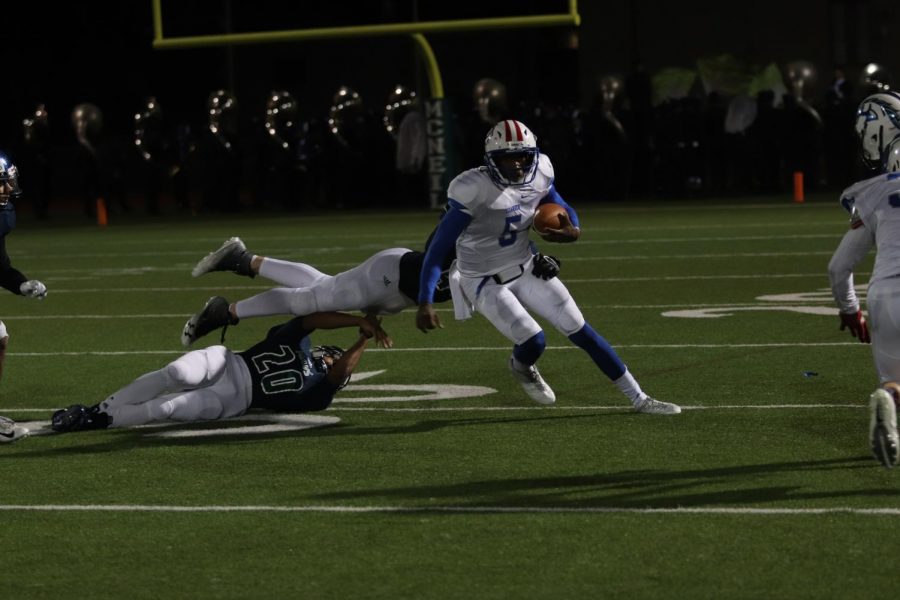 Rashad Carter (5) runs the ball for first down

The Leander Lions lost their away game to the Mcneil Mavericks 20-55.

“Our effort was definitely out there all over the field,” senior Riley Wells said. “We had players stepping up to play different positions than they’re used to playing.”

“I feel that we put all our effort in,” senior Bryan Puckett said. “We were more physical than them throughout the whole game in my opinion.”

The Lions were held scoreless in the third quarter while the Mavs scored another touchdown to increase their lead 43-13. The Lions scored a 1-yard touchdown from senior Riley Wells on the first play of the fourth quarter. The Lions went for an onside kick but failed to recover, resulting in another scoring drive by the Mavs. The Lions had a turnover on downs the next possession to set the way for the Mavs to score another touchdown before the end of the game. The Lions ended the game losing 20-55

“We’re all excited for our next game against Westwood,” Wells said. “It’s sad to me that this is the last home game the seniors will ever play.”

The Lions will play their next game against the Westwood Warriors in their last home game of the season and the theme is senior night. Tickets for general admission are $8.