JV volleyball finishes the season with a win 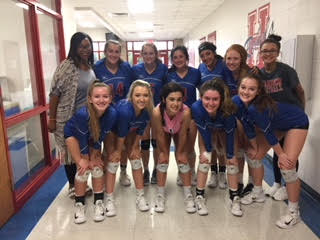 The Lady Lions beat the Rebels from Hays High School on October 20.

During the last week of season, the JV Lady Lions volleyball lost to Lake Travis High School on Tuesday, but won their Friday game against Hays High School.

“It was a tough loss,” Coach Alexander said. “I feel our team definitely learned from that game. It definitely gets them fired up for their last game against Hays.”

“[The game] was good,” sophomore Emily Irlbeck said. “We played, but we lost. We didn’t come together as a team and unify all of our skills.”

On Saturday, October 20, the JV girls beat the Lady Rebels in their last game of the season.

“It went well,” junior Alex Pena said. “It was a struggle at first, but then we got back up and regained our confidence.”

“We kind of all pumped each other up,” Pena said. “We had more energy, and we told each other what we needed to do in order to win.”