Softball kicks off with win against Lady Bulldogs 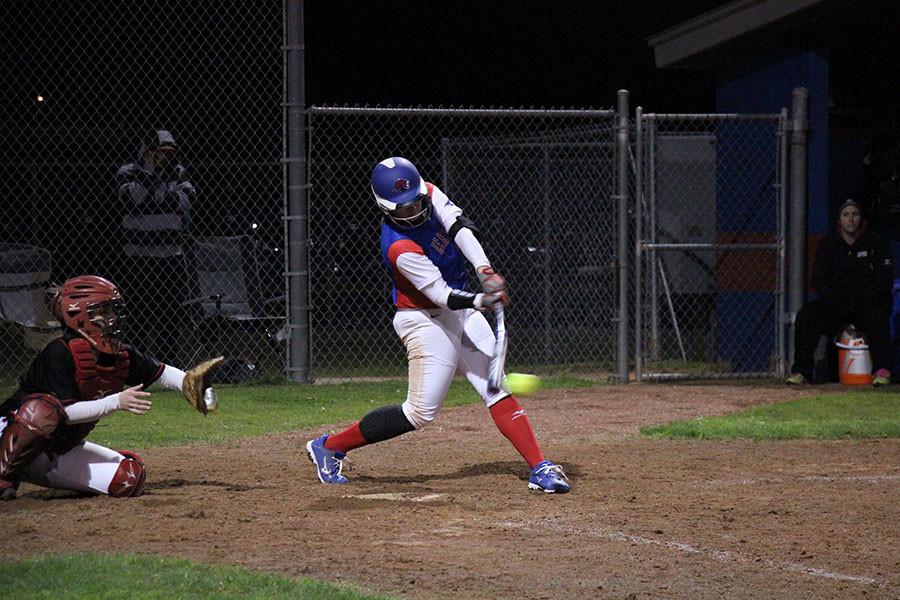 Junior Hailey MacKay striking the ball to get a single.

The Lady Lions softball season has now kicked off with the girls facing off against Bowie. The varsity Lions won a close game with a score of 5-4 in the bottom of the seventh.

“We played really well as a team,” junior Hailey MacKay said, “and when things got hairy and we made a couple of errors, we did a good job of recovering. We didn’t let it affect us, and we were able to pull out of it and work together well.”

At the end of the first inning, the girls were down 1-0 against Bowie. At the end of the second, the team scored two points to lead the Bulldogs 2-1. The third inning featured another score from the Lions which kept the lead 3-1. It wasn’t until the fifth inning that the Lions scored again making the lead 4-1. Bowie began to make a comeback at the end of the sixth with a score of 4-2. The seventh inning was the closest as the Bulldogs scored twice tying the game 4-4 at the beginning of the bottom seventh.

“I think I helped contribute to the team really well,” junior Amanda Patek said. “Coach likes me to run bases for them [players] so being able to do my job and help win the game was really exciting.”

The Lions were able to score one more time to win the game with a score of 5-4. Senior Shelby Irlbeck hit a single. Patek then substituted as Irlbeck’s base runner. MacKay and senior Kara Jones both were walked, and with the bases loaded Patek scored on a pass ball giving the girls the win.

“[It made me feel] super excited,” Patek said. “When I first slid in I was totally like ‘Oh who’s even cheering?’ because I didn’t know what the call was, but apparently the catcher had dropped the ball when she was trying to tag me so I was safe, and it was really exciting.”

“[Next week] with Rouse we really just need to focus on scoring a lot of runs and do a better job of executing with our runners and getting in a scoring position,” MacKay said. “We left too many girls on base last night and we just need to step up in those situations and push runs across the plate and just be tight with our defense and get a good win under our belt before district starts.”

JV next has a tournament at Round Rock High School this Friday. Varsity and JV will play Rouse next week at home on Tuesday.