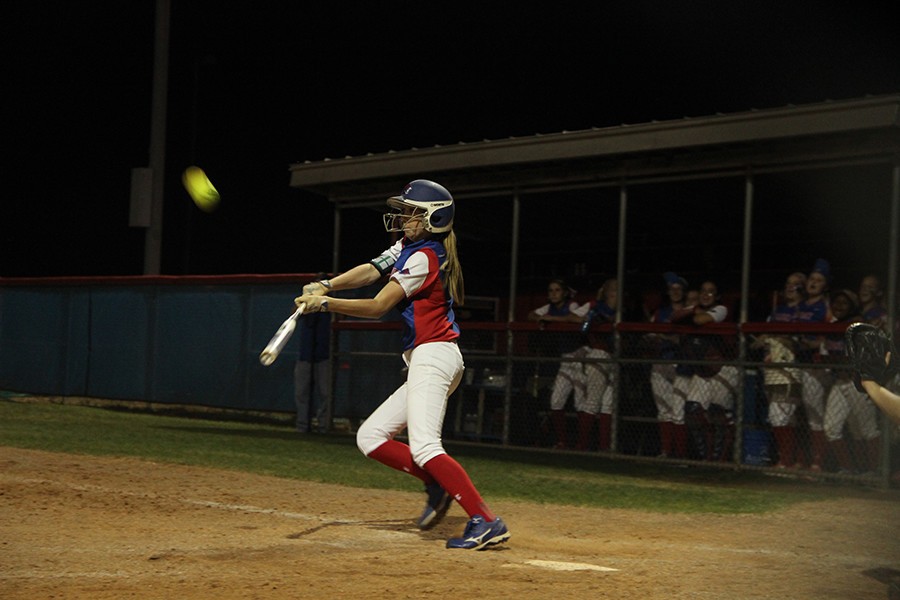 Now senior Shannon Dodd hitting the ball last season during senior night. Dodd is one of the four seniors currently on the team.

The Lady Lions varsity softball team went into the regional playoffs last year, but fell short to Georgetown in a three game matchup. This year, they look to continue to have a great season, and into the playoffs.

“We are feeling confident that our team will do great against Stony Point, and do great throughout the season,” senior Shannon Dodd said.

This year there are six seniors: Gabby Walton, Hailey MacKay, Adrienne Vasquez, Kellie Jeanes, Ashley Burgess and Dodd, all with experience in the game. They have high expectations and goals for their final season.

“My main goal is to just enjoy my last year, and I want the underclassmen to know that I gave my all for this program and for them as well, because they’re the ones that will continue what’s been established here,” MacKay said. “As far as other goals I want to be super productive at the plate and score a lot of runs because I think that’s gonna be a big deal for us this year.”

The team’s first opponent for the regular season, after tournaments and scrimmages, is Austin Bowie. The game is February 16, at Austin Bowie at 7:00 p.m.

“We’ll be lifting, working on fundamentals and focusing the most on solid defense and lots of production at the plate,” MacKay said.