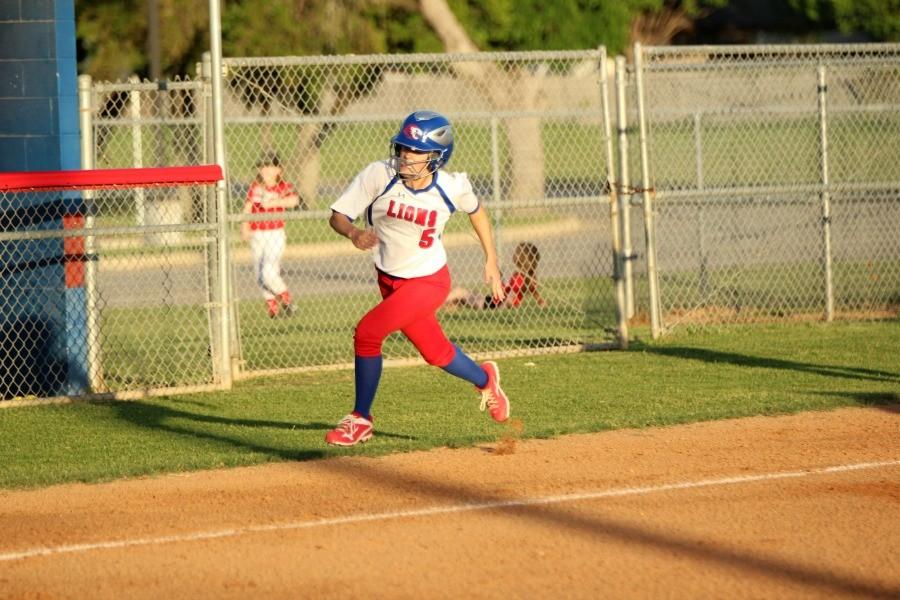 Senior Gabby Walton running towards home plate to score a run. Walton scored one run in the game.

“We did a good job of getting runners on base and winning every inning,” sophomore Emily Walton said. “We also played solid defense to prevent Vandy from scoring more than one run.”

The Lady Lions shot ahead early in the game, leading 4-0 after the top of the third inning. Seniors Gabby Walton and MacKay each scored runs in the first. In the bottom of the second, Henderson and junior Abbey Orlich each scored runs off of a MacKay double. In the top of third, G. Walton caught a ball in the outfield which resulted in a Lady Lions double play. G. Walton hit one single and one double, and scored one run in the game. Her sister, E. Walton, had one RBI, two singles and one run during the game. In the bottom of the fourth, Henderson stole bases all the way to stealing a run increasing the score to 5-1. Henderson had three steals in the game.

“I think I did pretty good,” E. Walton said. “On offense I had an RBI fly and a line shot down the right field line. Also, on defense I (as well as the whole team) was error free on the night.”

Then, both G. Walton and Hailey MacKay hit back to back doubles that led to an RBI for sophomore Mackenzie Catalina. Catalina hit three singles in the game, and had one RBI that was scored off by MacKay. Now, the Lady Lions led 7-1. After a series of stolen bases, and two RBIs for Henderson, the Lady Lions defeated Vandegrift 12-1 with the game ending early.