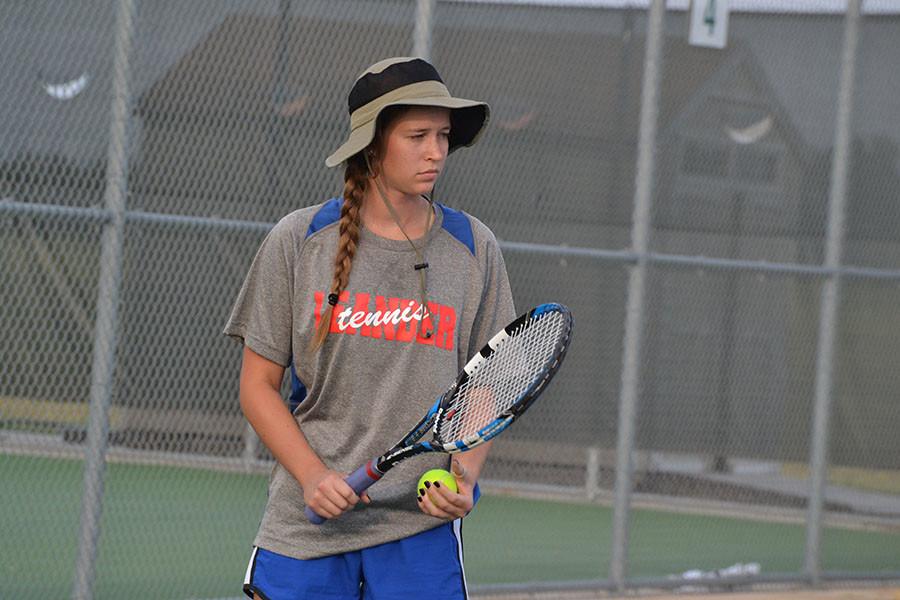 Senior Madison Flesner preparing to serve. The Lions would win against Rouse 10-9.

The Lions faced a tough defeat against Killeen 4-15, but bounced back and triumphed over the Rouse Raiders with a score of 10-9 the next day. They also gained another win against Marble Falls 11-8.

“In the last two game the key was the overall team’s execution,” senior Luis Farias said. “We made the shots that we had and we diminished our mistakes. It was really attributed to a whole team-effort and that’s what made us win.”

He still thinks however, there was definitely things he could’ve done better.

“There was a lot of wind on Friday, and it really took Joseph and I many matches to get used to it,” Farias said. “We should’ve won our doubles match. We’re not strangers to wind but we should learn to play with it and play smart.”

On top of those victories, mixed team senior Adhithya Balaji and junior Emilie Scanlon now have a record of 8-2 in this season so far.

“The victories in my mixed matches were mainly based on my powerful serves, and Emilie’s strong forehands,” Balaji said. “We’ve also been communicating a lot better and we’ve been able to focus a lot harder in our matches.”

In these double matches they have a more in depth strategy to insure victory for them.

“Our strategy in mixed is usually to target the weaker player,” Balaji said. “Although recently, we’ve been trying the strategy where I attack any ball at the net while she covers the back.”

With the win, there was things Balaji also enjoyed about the match on Friday.

“The best part of the match that night against Killeen was just how close the match was,” Balaji said. “And how much fun it was to play against a team that was pretty even in terms of skills.”

The Lions are facing off against Connally on September 18th at the home tennis courts at 4:00.