Tennis faces off against Timberwolves, Patriots

Players enjoy the matches against their opponents 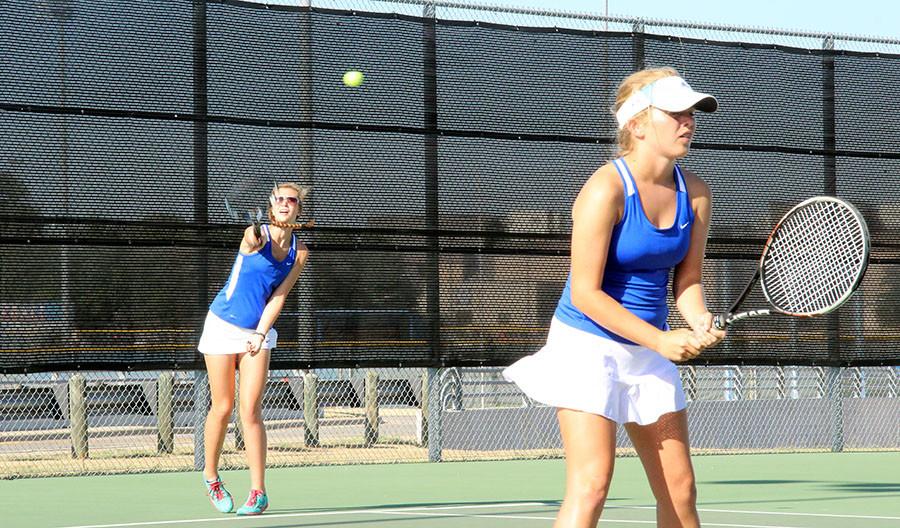 Tennis players serving the ball to the other team. Varsity ended up losing both games against Cedar Park and East View.

The tennis team lost to Cedar Park last week with a score of 13-6. On Friday they lost to East View with a score of 10-9. Junior Emilie Scanlon talked about the results of the game. The results of her first match with her doubles partner, senior Adhithya Balaji, was 6-4. The second set was 3-6, while the third was 10-6.

“All of us worked really hard, but we made too many unforced errors.” Scanlon said. “I hoped that we would’ve been able to have more wins, but we unfortunately didn’t.”

She also explained a section of that game she enjoyed.

“My favorite part of that match, or any match really, is watching Lauren Fuller’s singles.” Scanlon said. “I admire how she plays, and even though she lost, she still tries really hard and plays well.”

Along with that she showed some regret with that match and shared some things she could improve on.

“I just wish that I would improve my volleys so I can make more shots at the net.” Scanlon said. “But other than that, I think Adhi and I have had a really good season and I hope that we get to continue that.”

Against the Patriots, the Lions came up just short with a score of 10-9.

“We came out with the mindset of needing to win.” senior Conner Evans said. “This was an important game because if we lost we would go into tournament season playing one of the hardest opponents in the district. We all played really well, we just fell one game short.”

He also divulged into a match that happened that night when he played with his doubles partner senior Nathan Archibald.

“My doubles partner Nathan and I played real well against the other team and the game was back and forth but we ended up on top.” Evans said. “It was one of the best doubles matches I’ve played.”

For Evans, that’s all he needed.

“I don’t know if I had any regrets.” Evans said. “It was a good night of tennis.”

This Tuesday the tennis team will face off against Georgetown on the opposing team’s tennis court starting at 4:00 p.m.