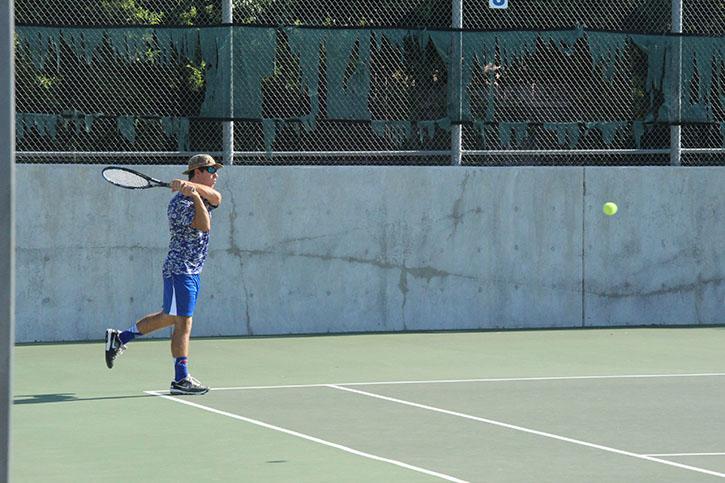 Senior Ricardo Acosta hitting the ball back to the opposing team. They would be eliminated from district on October 6.

In the first of their final regular season district games, the tennis team fell to the Georgetown Eagles with a score of 19-0. Junior Alex Nandin was paired with sophomore Abby Parker for doubles and she also competed in singles.

“I thought we did very well considering what happened.” Nandin said. “I’m proud of the people who won the matches.”

Nandin also said what she thinks the team should change before the next match.

“[We need to change] our mindset.” Nandin said. “I would’ve liked to see how we could’ve done if we didn’t know how good they were.”

Sophomore Camryn McDaniel agreed with the team’s performance. Her sets for her doubles match were 6-0 and 6-2. She played alongside senior Madison Flesner, who had two single sets with scores of 8-2 and 6-1.

“I thought we could’ve played better but we were against a very good team.” McDaniel said. “We played to the best of our ability”

After the game was over, McDaniel had some regrets for both herself and the team.

“I think I should’ve gotten my serves better.” McDaniel said. “We also created our own problems.”

On October 6, they began the district tourney at 4:00 against Dripping Springs. The score was 10-1 and they have been eliminated from playoff contention.

On October 15, the junior varsity team will be against Cedar Ridge at 4:00 p.m. on the Raiders’ tennis court.