All four teams win against the Mustangs 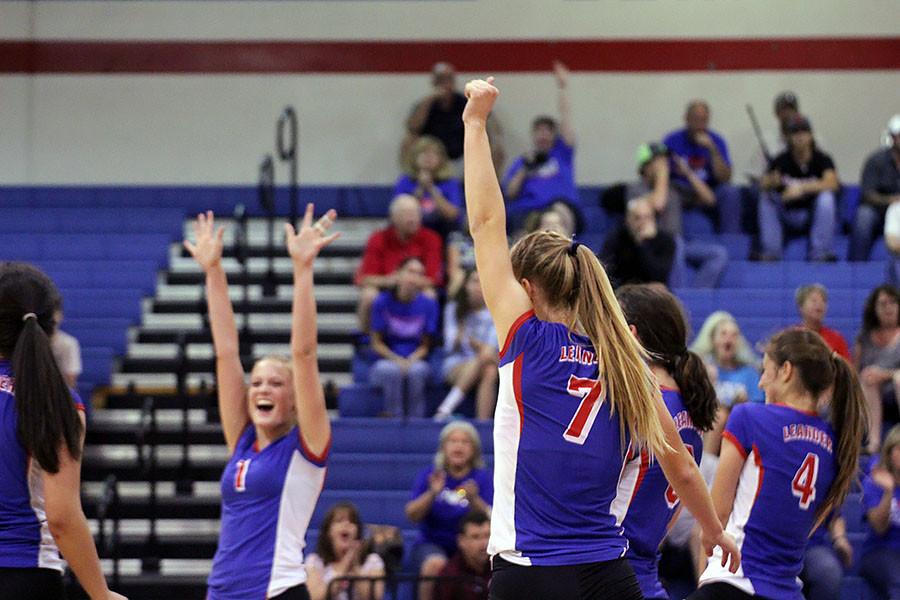 Senior Callie Reed throws her fist up after scoring in her games. The Lady Lions won all of their sets, sweeping the Lady Mustangs.

The Lady Lions took on Marble Falls Tuesday night, September 22nd. It was a sweep by all four teams with each one beating their opponent.

“We played with good intensity,” junior Lindsey Resa said, “and had fun with each other!”

The JV team’s offense had a positive outcome against Marble Falls. The final outcome of the game was 2-0, Lions up. The first set was 25-22 and the second 25-14. One player, Lesley Hall, stated that they “crushed marble.”

“We played amazingly tonight,” freshman Amanda Larson said. “Every single team won. We played strong and came out on top.”

As well as the JV and Varsity, Freshman A swept Marble Falls last night with a turnout of 2-0. They ended the game with the score of the first set being 25-18 and the second 25-20.

“We are working really hard in practice and in the game tonight we showed our improvement,” freshman Claire Imig said. “We came out strong and stayed strong throughout the whole game. I’m excited for the next game.”

With an ending score of 2-0, the freshman B team beat Marble Falls.  The team had a productive offense similar to the JV team. The score for the first set was 25-15 and the second 25-21.

“The girls are working hard learning position and how to be defensively strong and tough,” freshman coach Kendal George said.

The Lady Lions’ next game will be Friday, September 25. The girls will be playing against and at Vandegrift at 5:30 and 6:30.