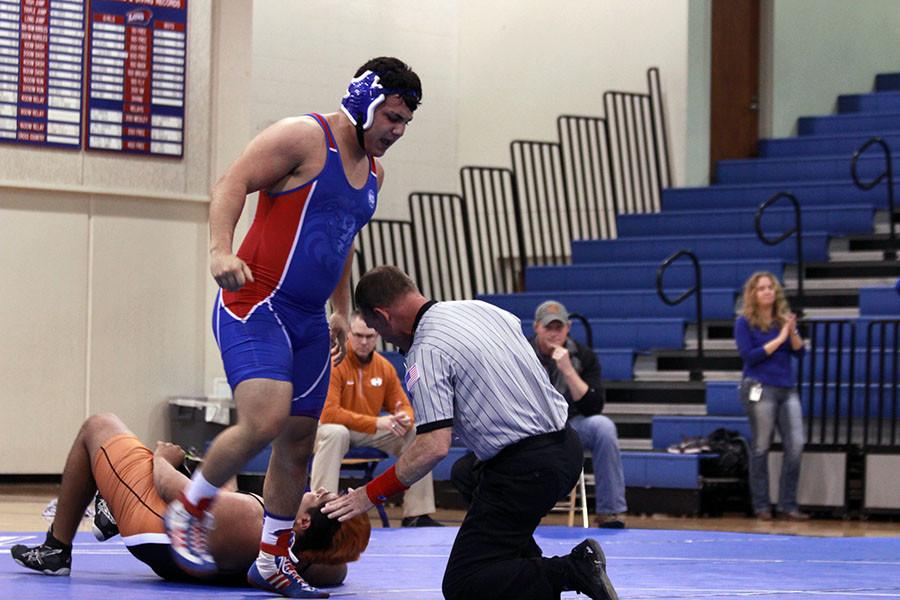 Varsity wrestling took on Hutto in the main gym at on December 9 for their first home meet of the year and won by a score of 66-9.

“I am very proud of this team so far this year,” Head Coach Adam McLain said. “They have started to come together as a team and it has pushed them to practice and compete at a higher level. We have a good mix of styles and skills that everyone has been able to learn from to expand their knowledge of the sport.”

JV was cancelled but varsity competed in duels against the Hutto Hippos. Out of the 12 matches, 11.9 of them were won by pinning the opponent. 10 wrestlers went undefeated ranging from the 106 weight class with Vincent Garcia and the 285 weight class with Zeke Garcia.

“The two wrestlers that stood out the most were Dylan Wyatt and Vincent Cash,” McLain said. “These are two guys that just started wrestling a month ago. They came over from football and really bought into the sport and it’s starting to show. They each picked up their first varsity wins this week.​”

Next, wrestling competed in the Pflugerville Tournament at Hendrickson High School. They had 17 wins and 6 losses.

“I think overall we did pretty well,” sophomore Jeremy Kracy said. “I think that Coach McLain and Coach Arteaga are good coaches and we do a good job learning from each other at all of our practices making us a pretty good team.”

“[My favorite part of the meet] was when I won my second match,” freshman Grant Burroughs said. “It was the first match my dad has seen me wrestle in in 5 years.”

Next varsity wrestling will be competing on Saturday at the Hill Country Invitational at Vista Ridge.