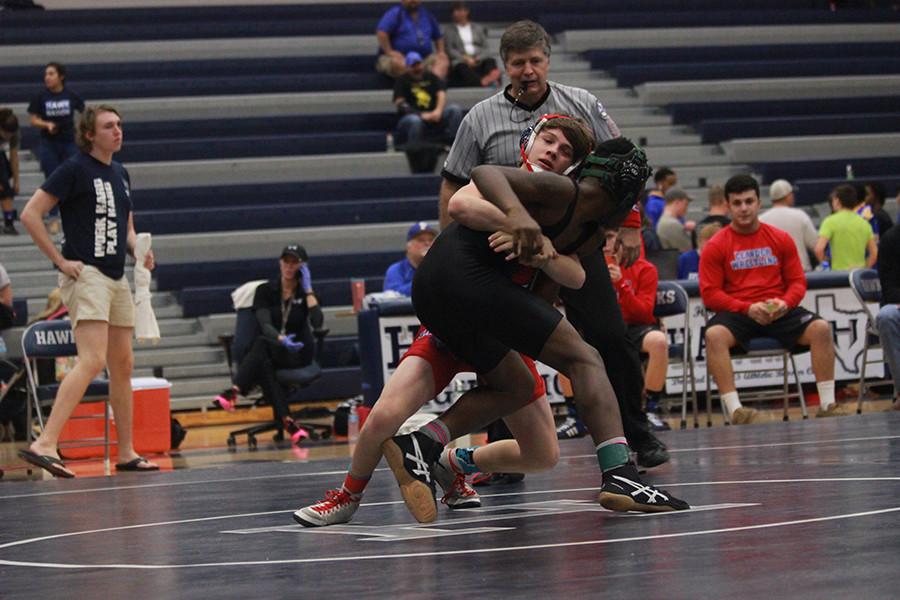 John Geiger wrestling for Leander in the Pflugerville Tournament. He went undefeated during the meet.

It’s all he knows, it’s what he loves, he’s been doing it since he was 5 years old. It’s wrestling.

Freshman John Geiger was born here in Austin, Texas and has lived here his whole life. He has been a club wrestler at 3F Wrestling but this will be his first year as a varsity wrestler.

“It’s a way for me to get some anger out,” Geiger said. “I love all the preparation that it takes to have one match and then win it lets you know that all of you and your teammates hard work pays off.”

Geiger starting wrestling when he was five when his dad introduced him to the sport, and he fell in love with it immediately. Since then he has gone on to win huge awards and be recognized on many levels.

“When I started wrestling I was 5 so I mostly messed around,” Geiger said. “Then I really loved to wrestle people so I would just go around and ask a kid my size to wrestle and that’s when I knew that I loved wrestling.”

As a freshman, Geiger is on the varsity wrestling team that is starting up their season and so far he has helped contribute to their victories in the 113 pound weight class. Outside of school is where some of his favorite achievements lay. He has won a National and State Championship for wrestling.

“[My favorite wrestling moment was] when I won the national tournament,” Geiger said. “It went into the 4th and final overtime and I won by decision, it was one of the many favorite moments in wrestling I’ve had.”

These achievements and the ones to come have come from the people who have helped him like his Coach Will McKinney and his parents.

“He’s the best coach around and I have been with him for awhile and he has improved my technique and has made me a better overall wrestler,” Geiger said. “My mom and dad have always been there for me and my parents are my biggest supporters.”

Outside of wrestling Geiger is heavily involved at his youth group at Hope Presbyterian Church, loves to fish and plays baseball. However, he is focused on wrestling because in two months Geiger will be competing in the State tournament to try to win his second State Championship.

“I’m excited to have another chance to prove what I am worth at State,” Geiger said. “I’m going to work hard in these next two month to make sure I’m one hundred percent ready to give me the best opportunity to do well and hopefully win.”