Team takes part in meet against schools all around Texas 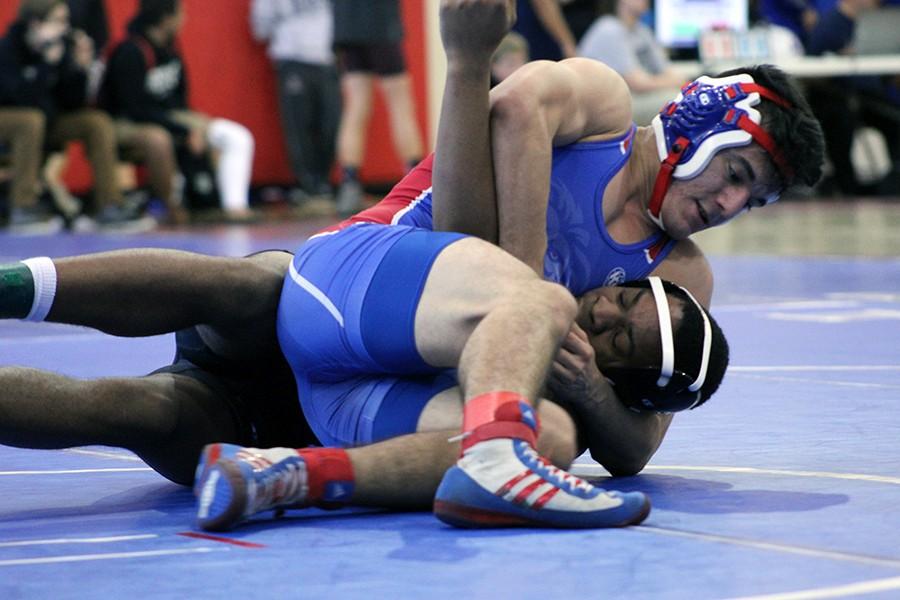 Junior Gabe Warren wrestles his opponent during the meet. This is seconds before Warren won by pin.

“I am very proud of our team from this tournament because it showed that we can match up with the teams in our district,” Coach Adam McLain said. “We have one of, if not the, most competitive districts in the state at the 5A level. We showed that we can compete at a high level in this district. Other teams are starting to take notice of the hard work these guys have been putting in.”

The Lions started early in the morning at Vista Ridge with schools from all around Texas. After a brief stoppage due to the electronic scoreboard crashing the wrestlers continued for a few more hours.

“I wrestled till the end and it took everything I had to win,” Geiger said. “I outlasted my opponent from Rouse that I grew up with and won 6-5.”

At the end of the day, five of the wrestlers placed in the top 5 of their classes. Reed placed 3rd, Garcia placed 4th, and Smith and Geiger placed 2nd. Junior Zeke Garcia finished 1st at the tournament.

“I focused more on what my opponent was doing so I could be able to counter off his mistakes,” Reed said. “I did well at keeping my cool until the end of the match so I could stay focused during it.”

The next meet for wrestling will be at the Cen-Tex meet at the DELCO center for the Varsity wrestlers.