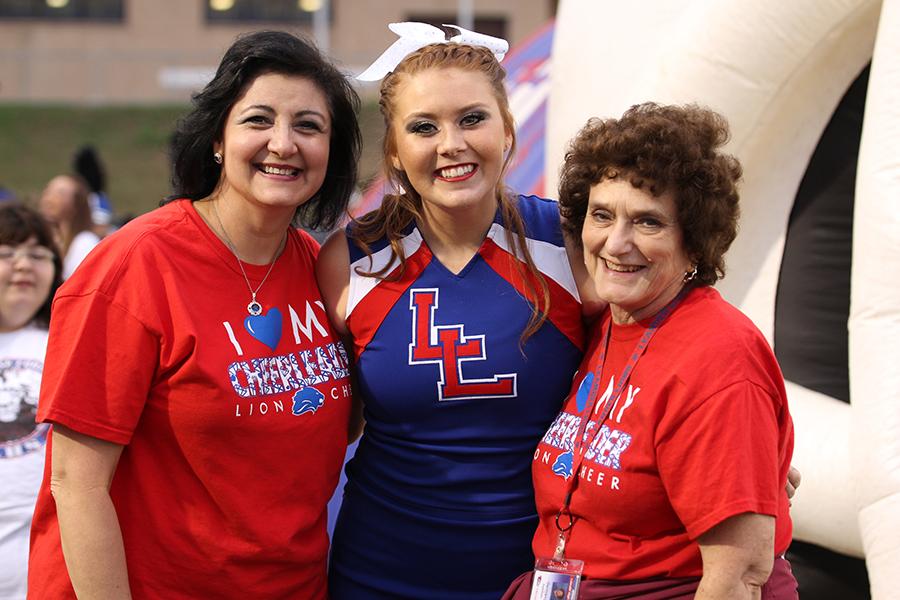 Mrs. Germany (right) with LHS alumna Makenna Williams (middle) and Mrs. Garcia (left) standing next to the tunnel. The football team runs out of the tunnel before every half of the game. (Danielle Bell)

Mrs. Germany (right) with LHS alumna Makenna Williams (middle) and Mrs. Garcia (left) standing next to the tunnel. The football team runs out of the tunnel before every half of the game.

On Friday nights, the football team runs through the tunnel with fans cheering them on as they get ready to play some football. The people who set up the tunnel on every Friday night is a group of students called Mane Force, led by Mrs. Deborah Germany. Mrs. Germany wanted to sponsor students who wanted to help out on the football field.

With the permission of the school board, Germany has been sponsoring Mane Force for more than 10 years. She has been here for 28 years, once serving as the cheerleading coach and currently teaching science.

“During that time I saw a lot of students that had a lot of school spirit but they really had no way to show it,” Mrs. Germany said. “When I stopped doing cheer, I went to the the principal and I asked him if I could start a spirit group for kids who weren’t in athletics or any other things, but still wanted to be part of a group and show school spirit.”

The club has already had more than 100 members participate since beginning in 2001. They first started with about 8-10 participants in the original group and now have 40-45 members. Before the games on Friday, the team meets up in Mrs. Germany’s room. If it’s an away game, they all load onto a bus. With them is the tunnel, which is what Mane Force has always put up since day one. They load off of the bus, get their assignments and they start to work setting up the tunnel.

Sadly, the group took a huge hit earlier this year when Mrs. Germany missed school due to an injury. Students stepped up in her absence to make sure the team had a tunnel to run through at every game. While she is back teaching, she was out for more than two weeks and she is currently in a wheelchair. That doesn’t stop her from leading Mane Force, because the group still hasn’t missed a game this year.

It gives them a place where they belong.”

“Anyone can join if you have school spirit and want to be involved,” Mrs. Germany said. “ I take them all to the football games, home and away. It’s a very diverse group of kids, but it works. We all get along. They all have a way of showing school spirit.”

This year, the football team now has two tunnels instead of one. Mane Force takes around 10-15 minutes to set them up. After they set up the tunnel, and the players are ready to run on the field, they get on the side of the entrance and use fire extinguishers to create smoke so the football team can run through it and be ready for the game.

“I think it’s a great group,” Mrs. Germany said. “It gives them a place where they belong and it’s a lot of fun. Come and join Mane Force because we have a lot of fun the entire year.”

The Roar intends for this area to be used to foster healthy, thought-provoking discussion. Comments are expected to adhere to our standards and to be respectful and constructive. As such, we do not permit the use of profanity, foul language, personal attacks, or the use of language that might be interpreted as libelous. Comments are reviewed and must be approved by a moderator to ensure that they meet these standards. The Roar does not allow anonymous comments, and The Roar requires a valid email address before a comment will be posted. The email address will not be displayed but will be used to confirm your comments.​
Comments are closed.
All The Roar Picks Reader Picks Sort: Newest